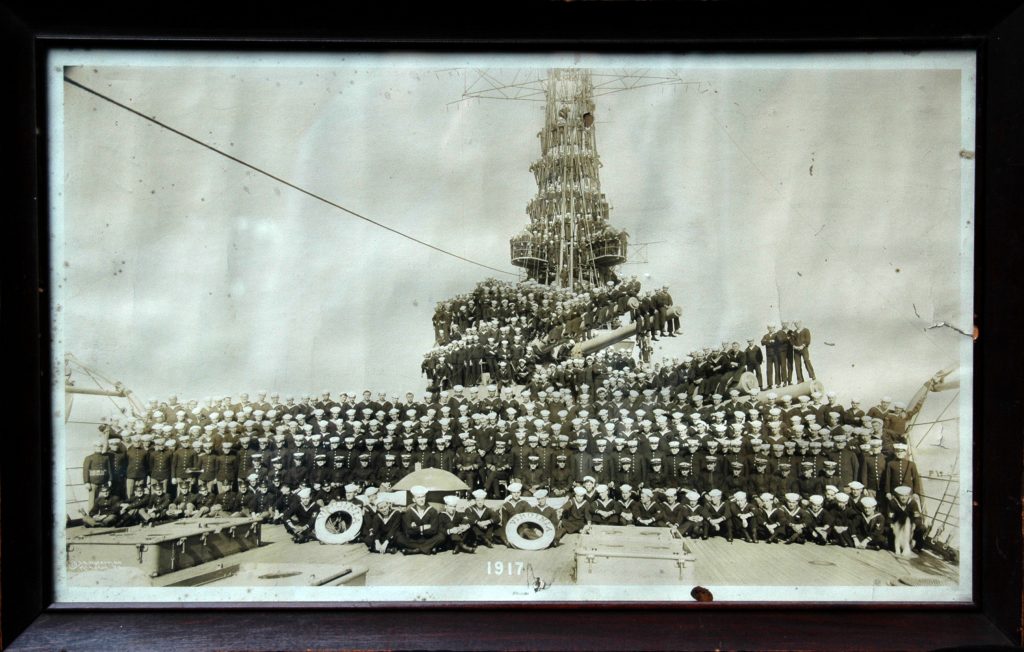 Lead ship of her class, Virginia was laid down on May 21st, 1902 at Newport News shipbuilding and Dry Dock Company.  She was the 5th ship to carry the name Virginia.  She was launched in April 5th, 1904 at Newport New, Virginia and commissioned into the fleet in May, 1906.

Initially she operated along the northeast coast until mid-September of 1906 when she went to Havana, Cuba for a month.  The next year saw unrest in Cuba and she returned to Cuban waters in March and April of 1907.  She was commissioned with Captain Seaton Schroeder in Command on May 7th, 1906. 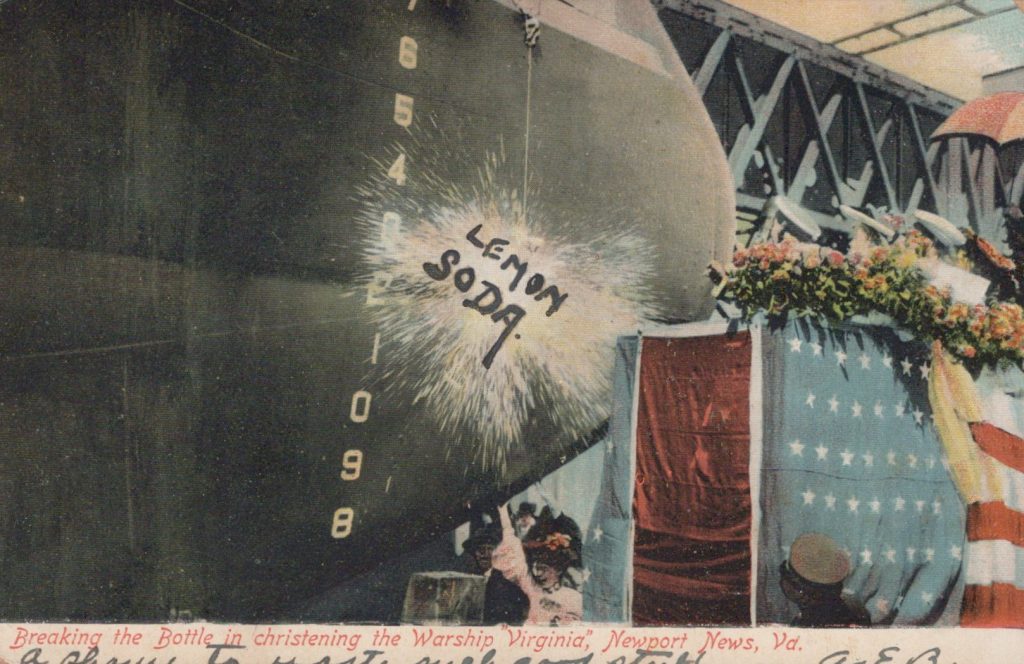 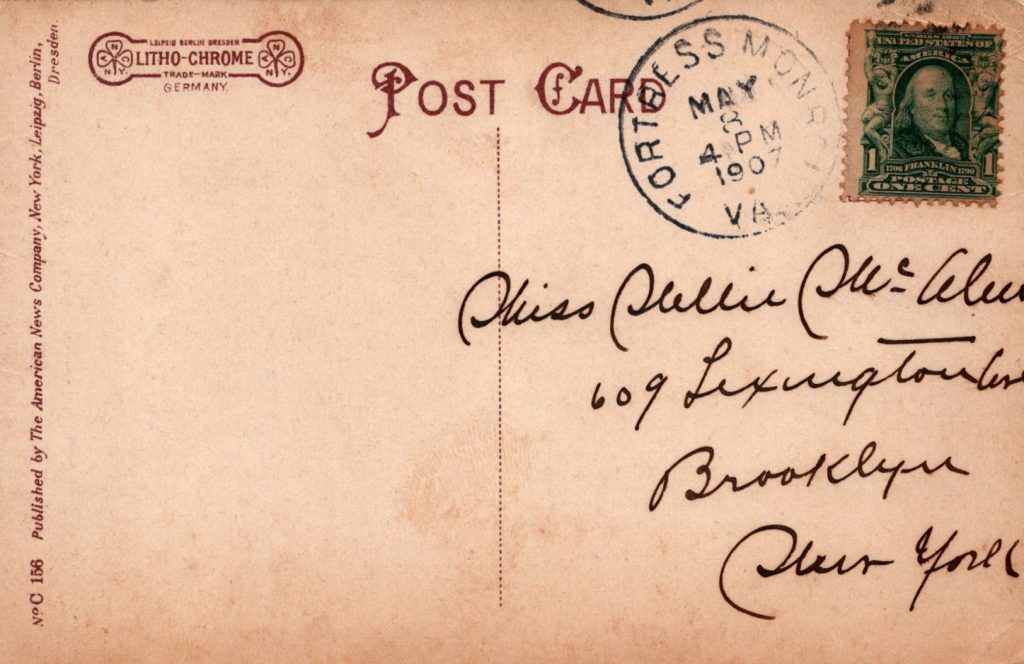 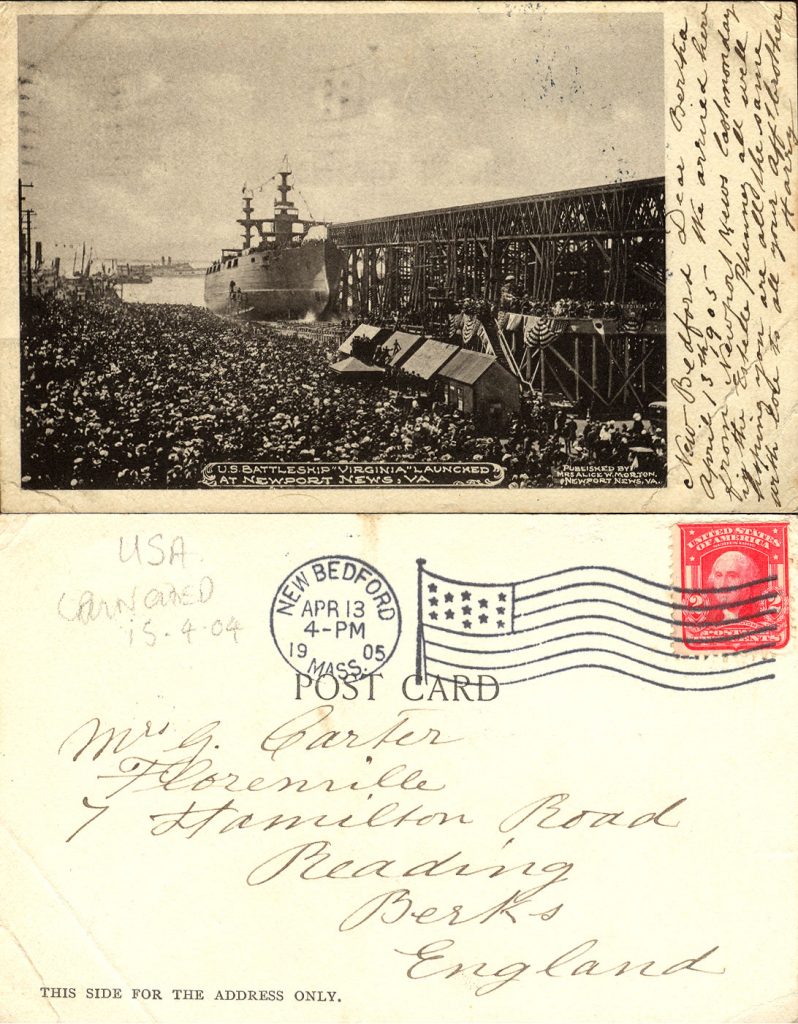 The card above showing the Virginia sliding down the ramp at Newport News with a large crowd of on-lookers.  The process involves imposing stresses on the ship not met during normal operations and is initiated by the a sacrificial bottle of champagne over the bow, at left. At right a wooden hand-turned challis created for the occasion in dark crimson-brown and gold. 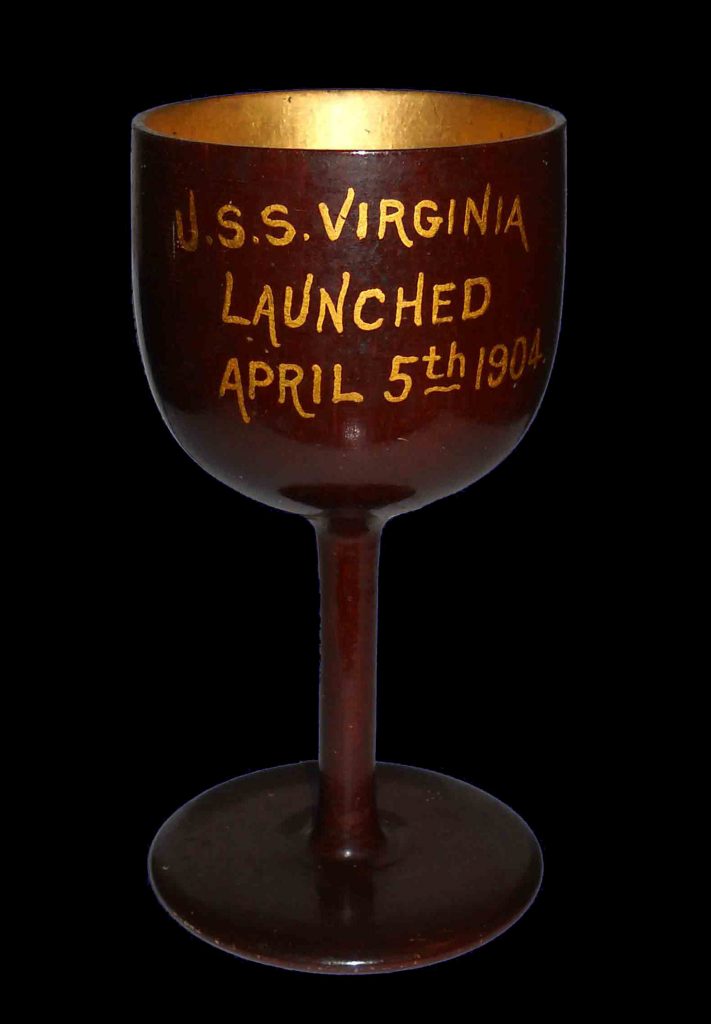 Below is a cabinet card showing the enlisted crew members of the USS Virginia, in their dress blues, camping in Cuba during training in 1906.  This cabinet card is part of the collection made by Frank Lesher, Chief Electrician, USS Virginia and can be seen on this site. 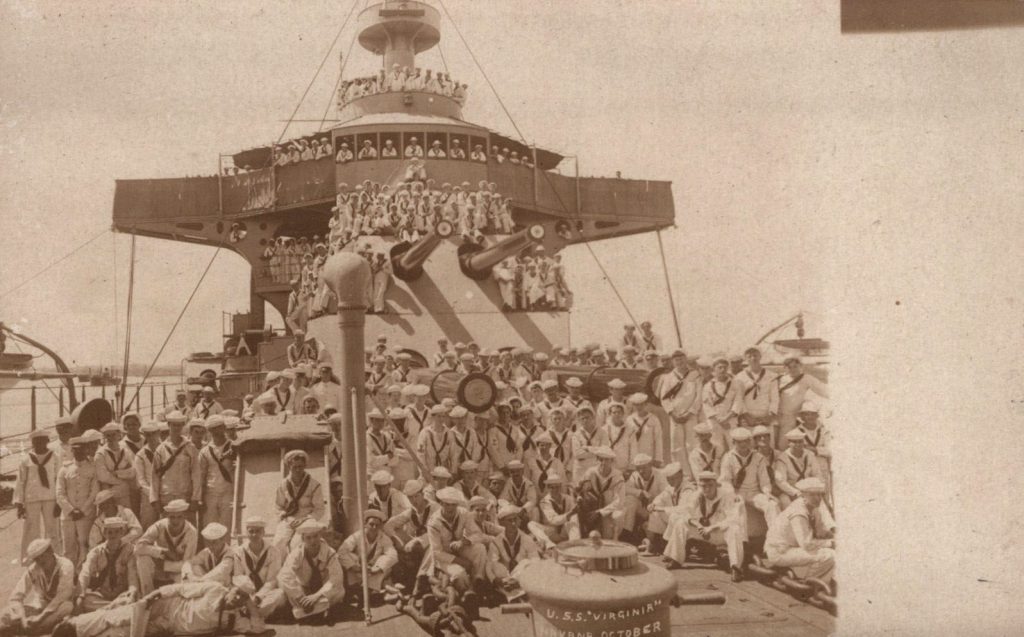 The card at left shows the enlisted crew of the USS Virginia on the forecastle and the superstructure of the ship for a photograph in their summer uniform.  The caption, on the capstan reads, "USS Virginia, Havana, October (1906).

This photo postcard captures a great element of the Navy during that period.  A casual photograph of the enlisted crew, with sailors casually posing on deck of their ship in a dress uniform..  In the lower left a sailor is lying down.  In the photograph there are no CPOs or officers and the sailors in the picture were able to choose where they wanted to be for the photograph. 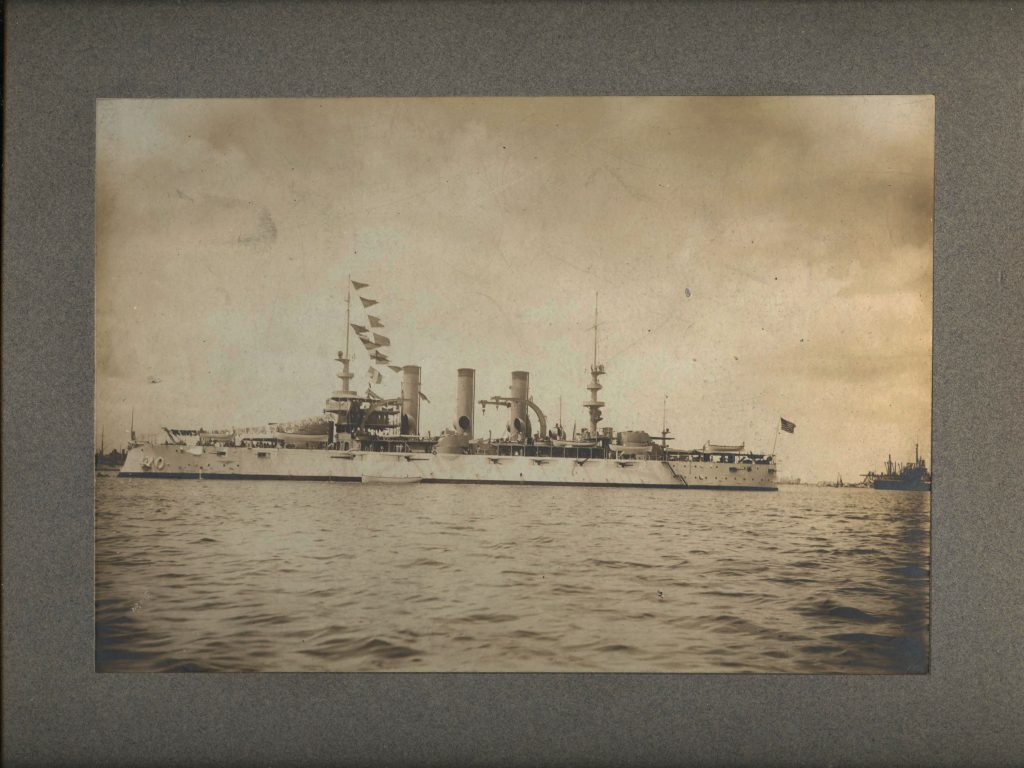 Above, a large format cabinet card, the collection from Frank Lesher, showing the USS Virginia in 1906 while anchored in Havana, Cuba.  Below is a card sent by Frank Lesher of the Virginia home to his Mother, canceled in October 1906.  This was during a period that Virginia had been dispatched to protect the City of Havana from attack of of a revolution force growing within the country. 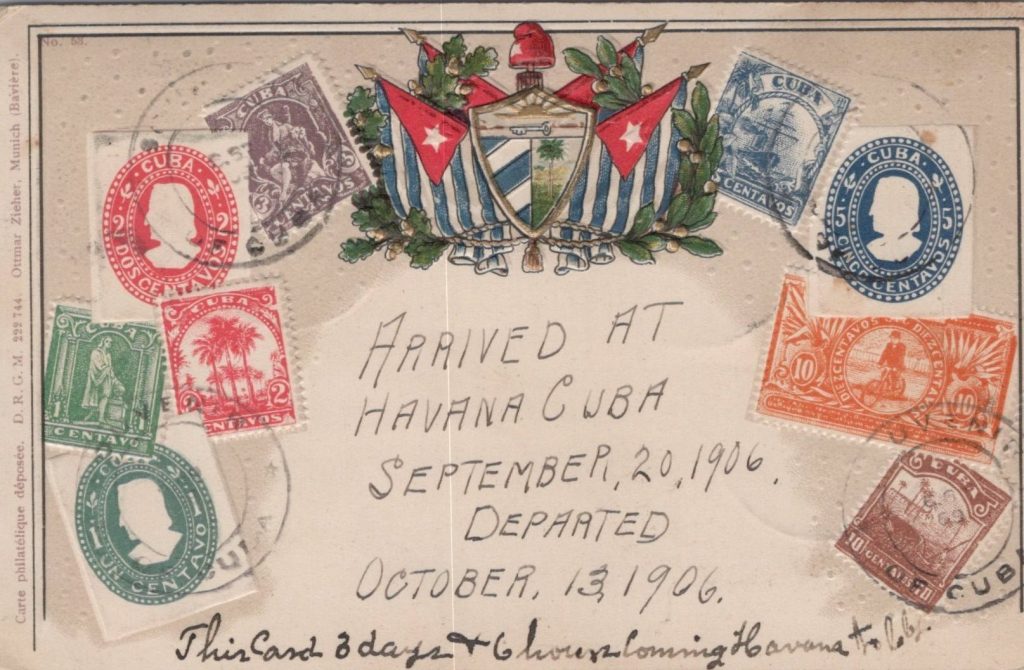 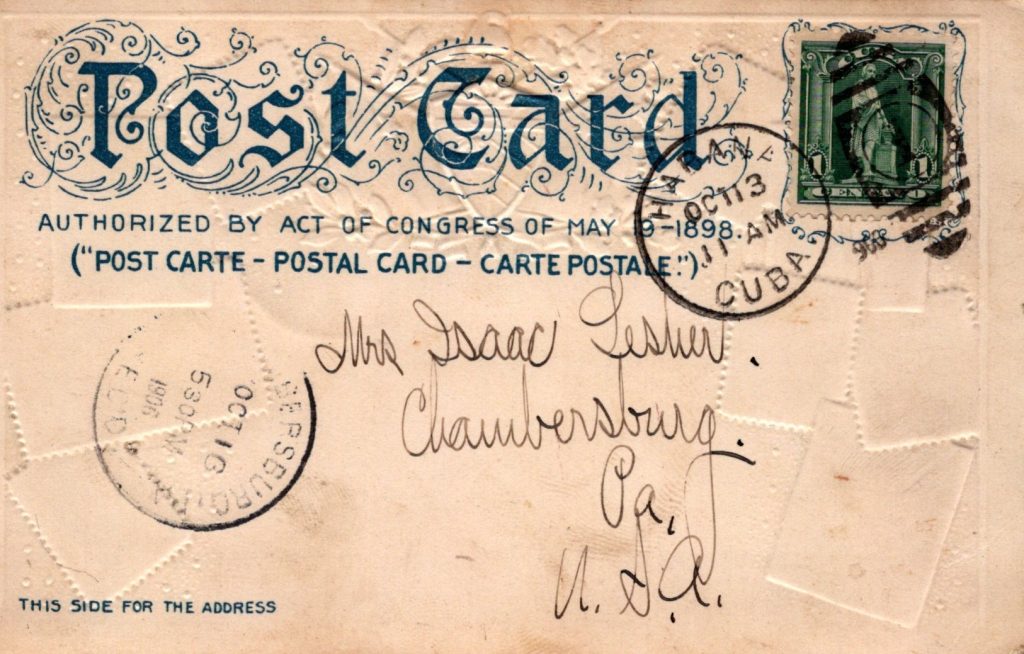 In May of 1907 Virginia arrived in Hampton Roads to participate in the Jamestown Tricentennial Exposition.  The Virginia was a key participant in President Roosevelt's plan to show off our Navy at the exposition.  The card at right, canceled in July, 1907 is an advertising card for George D. Witt Shoe Company in Lynchburg, VA.  Pictured is "Dixie Girl" wearing a pair of boots that, "Leads them All." 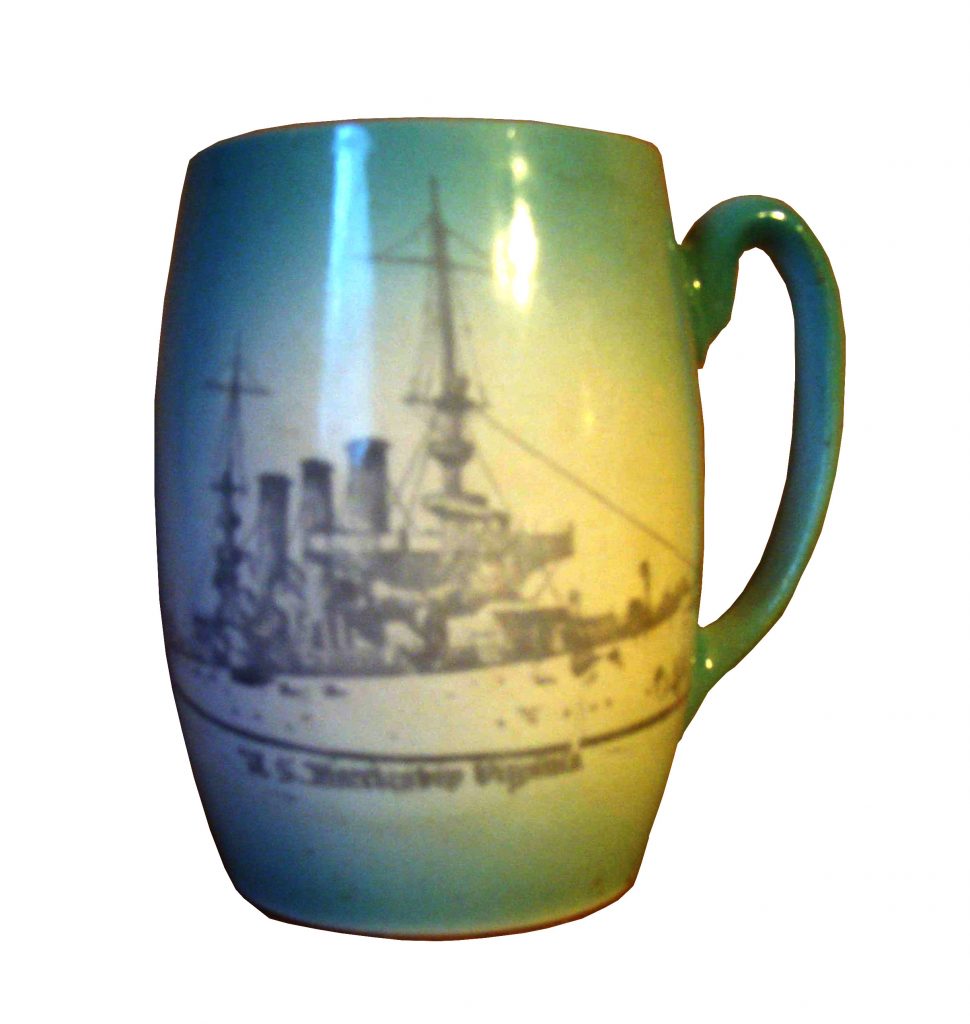 Above a mug from this period showing the U.S. Battleship Virginia.  The exposition was a opportunity for souvenir sales which attracted the creativity of businesses to design something unique and market it to the thousands of people who came to Jamestown and enjoy the festivities. 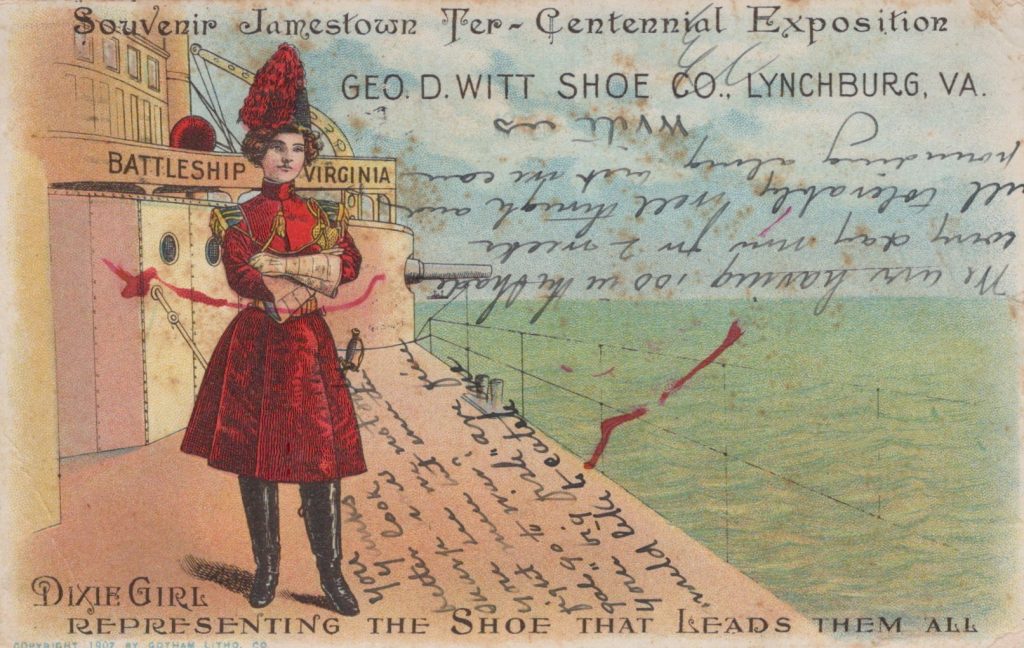 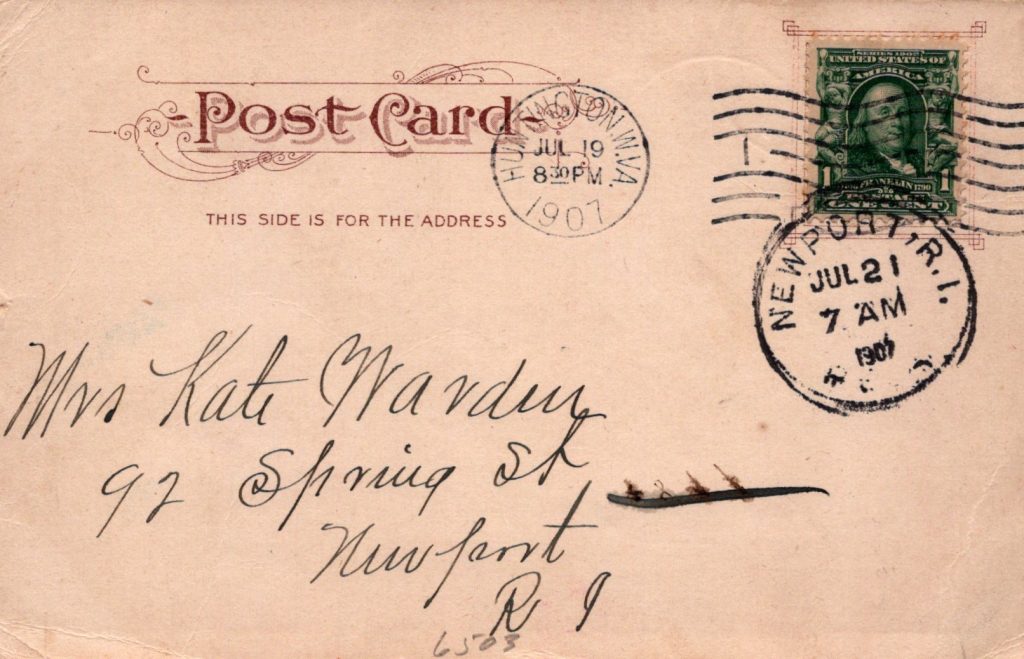 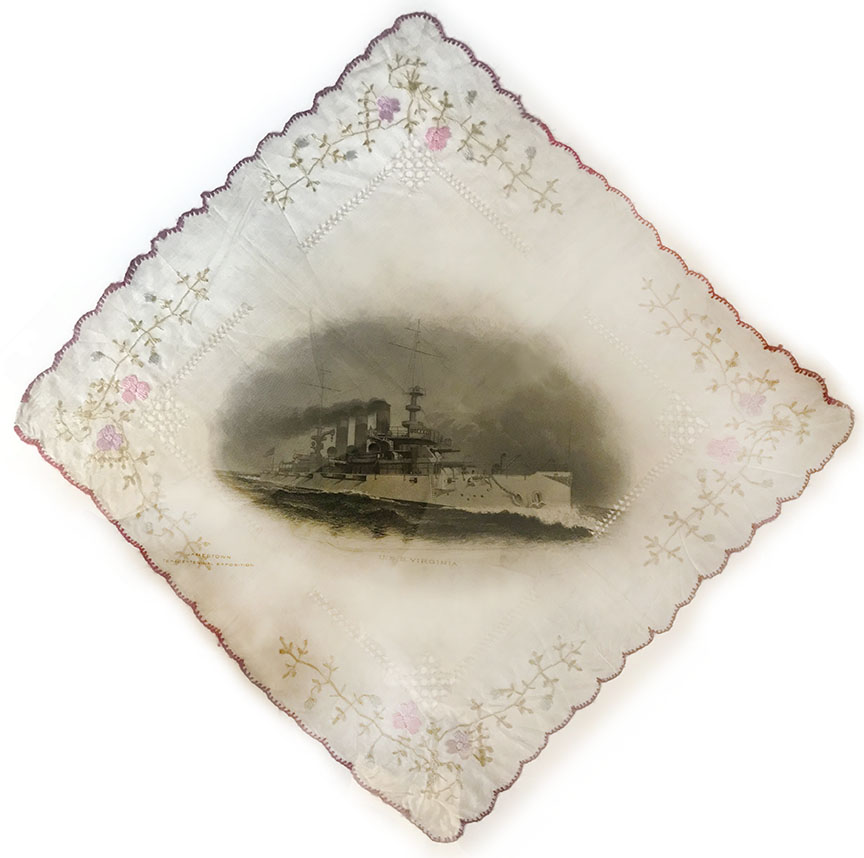