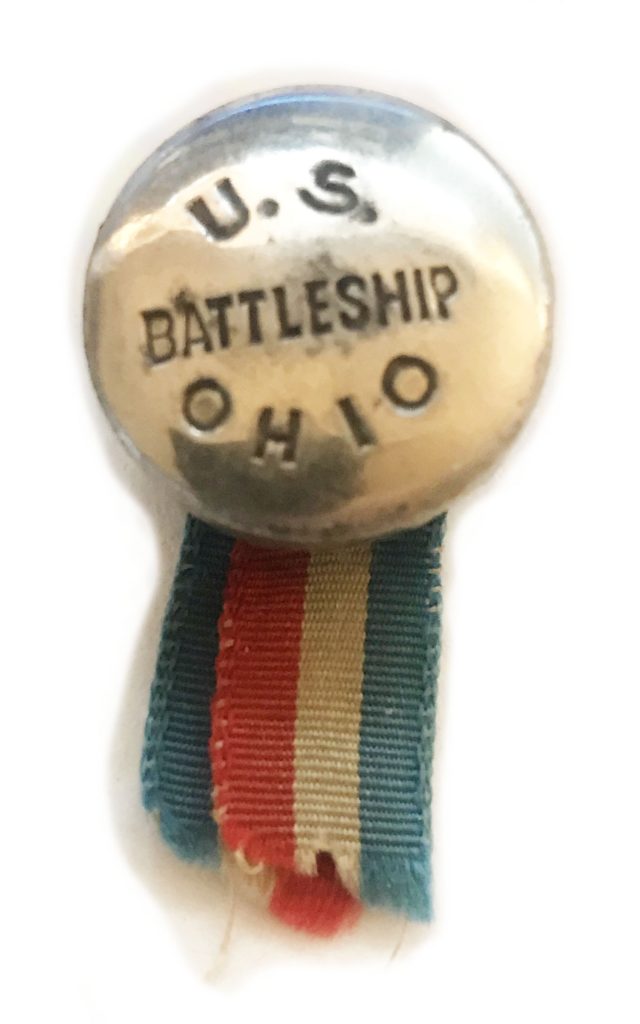 A Maine-Class battleship she was the third in her class following the Maine and Missouri.  She was laid down on April 22, 1899 by Union Iron Works in San Francisco and launched on May 18, 1901.  She was sponsored by Miss Helen Deschler, and commissioned October 4th, 1904, Captain  Leavitt C. Logan in Command. 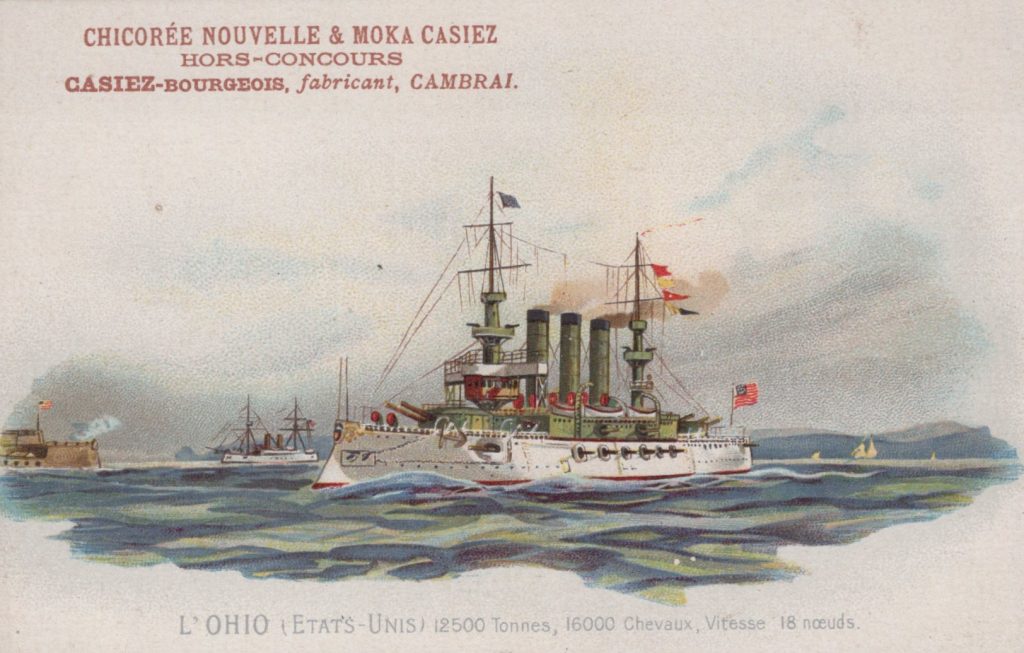 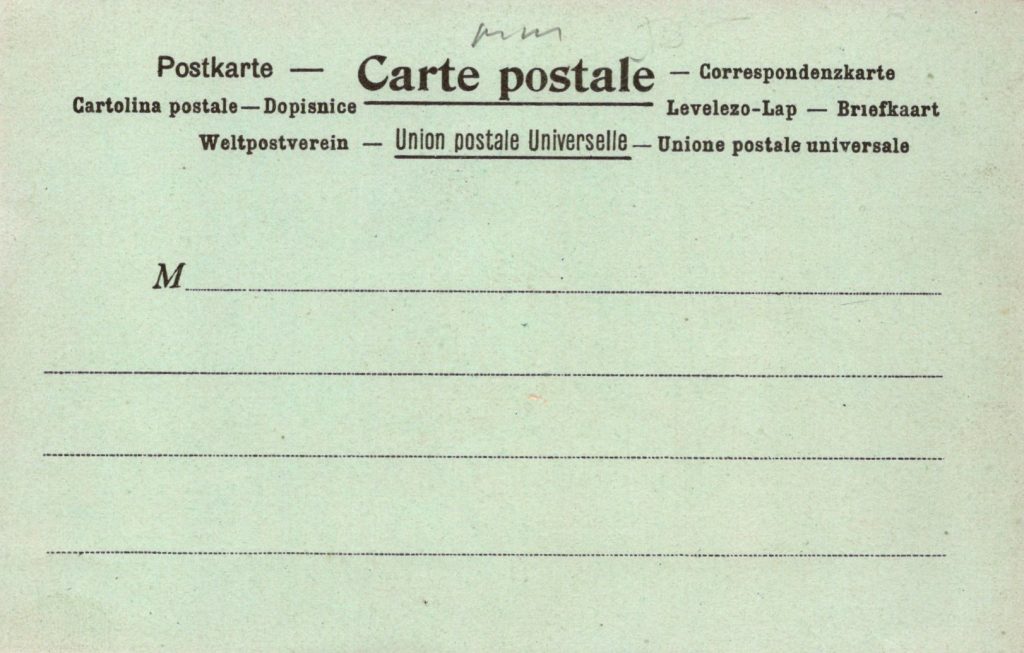 Designated flagship of the Asiatic Fleet, Ohio departed San Francisco April 1st, 1905 for Manila, where she embarked the party of then Secretary of War William Howard Taft, which included Miss Alice Roosevelt, the President's daughter.  She conducted this party on much of its Far Eastern tour of inspection, and continued the cruise in Japanese, Chinese, and Philippine waters until returning to the United States in 1907. 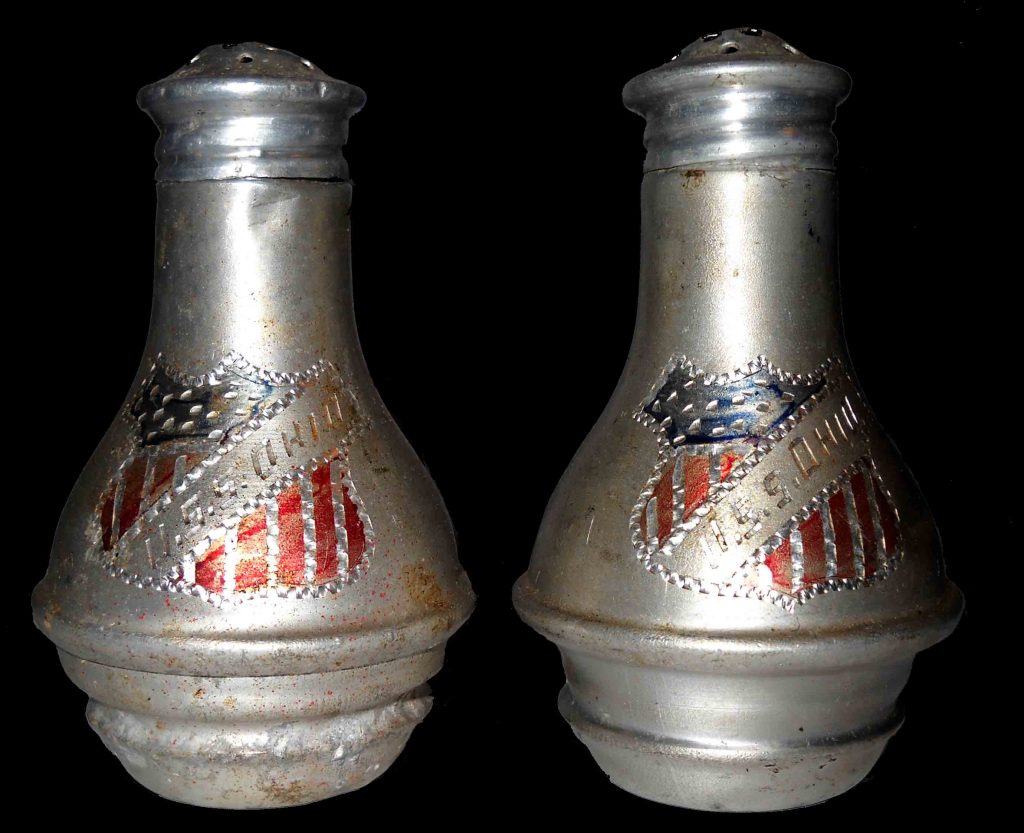 Above, A ribbon produced for the Launching of the Ohio on May 18th, 1901 in San Francisco.  On the back - printed by Walter N. Brunt, printing Badges, Regalia, Lapel Buttons on Clay Street in San Francisco.  In center a pair of souvenir salt and pepper shakes with a shield etched USS Ohio.  Made from aluminum they are about 2-1/2" tall. 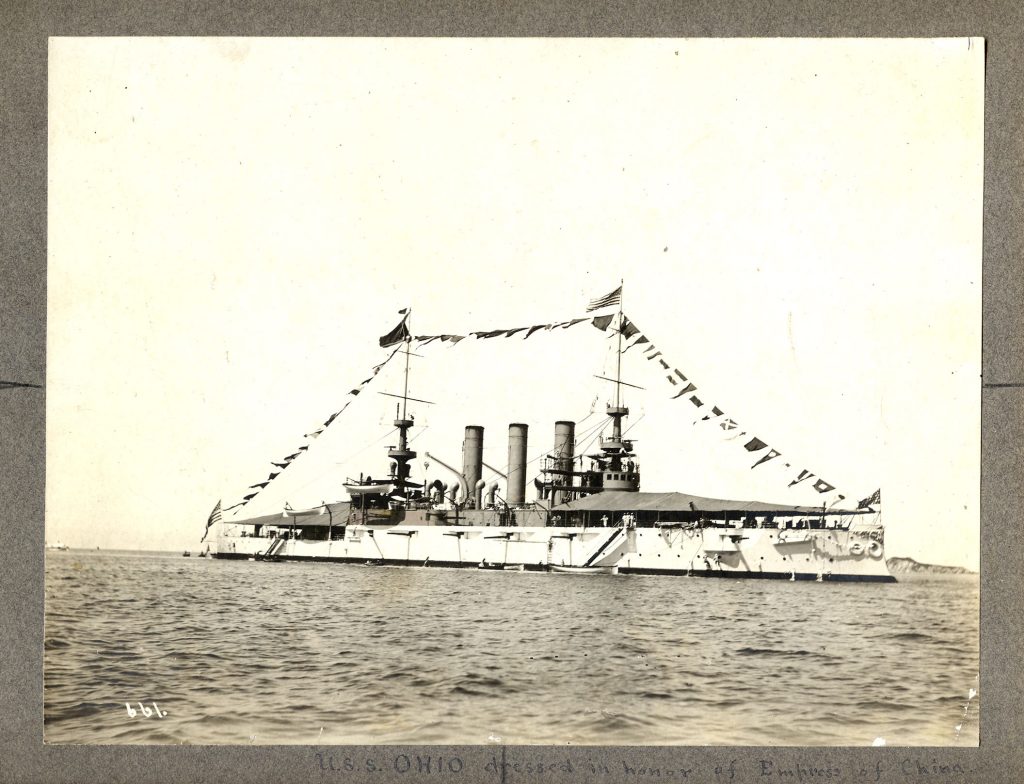 The above large format cabinet photo was taken while the ship was in Chefoo, China in 1907.  At the time of the photograph the ship was decorated for the Empress of China and carried on board a young midshipman named Chester Nimitz. 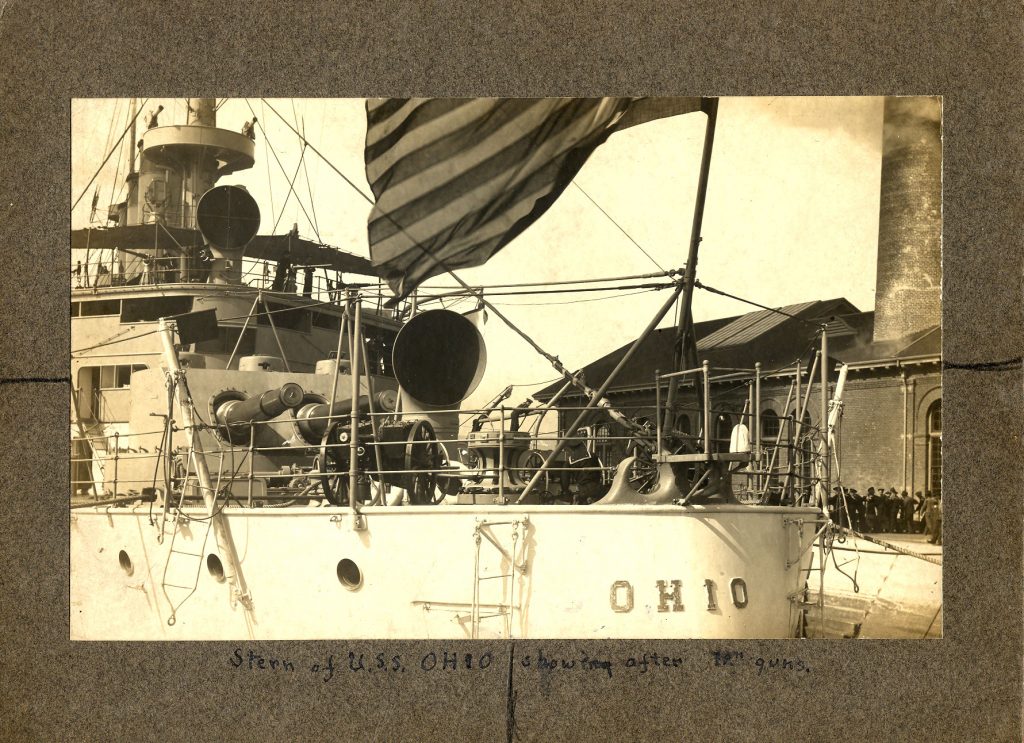 These two cabinet cards show Ohio in Mare Island Naval Shipyard being worked on in the drydock.

The Ohio was a Maine class battleship that was push by Roosevelt to be funded to improve the fleet.  It was one of the first ships to use smokeless power for the main batteries. Smokeless power allowed a decrease in gun size, with an increase in power and efficiency.  Ohio was fitted with two 12-inch guns on the stern.  She was also one of the last battleships to use Harvey Armor which has become obsolete when compared to the Krupp cemented armor which would have allowed the thickness of the belt armor to be reduced from 16.5 to 12 inches. 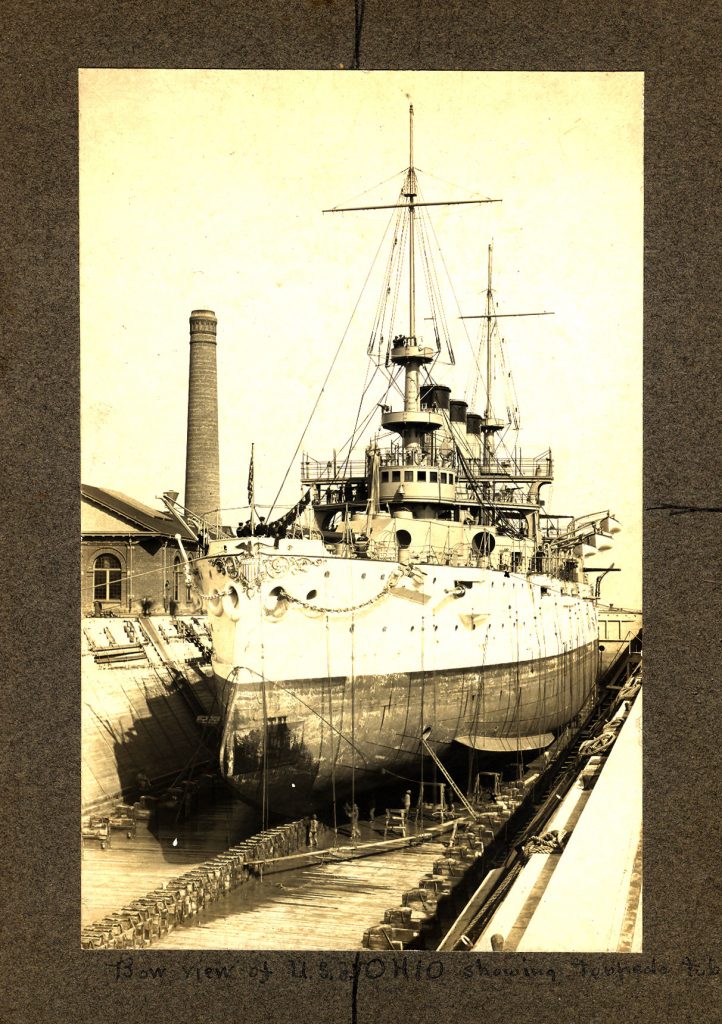 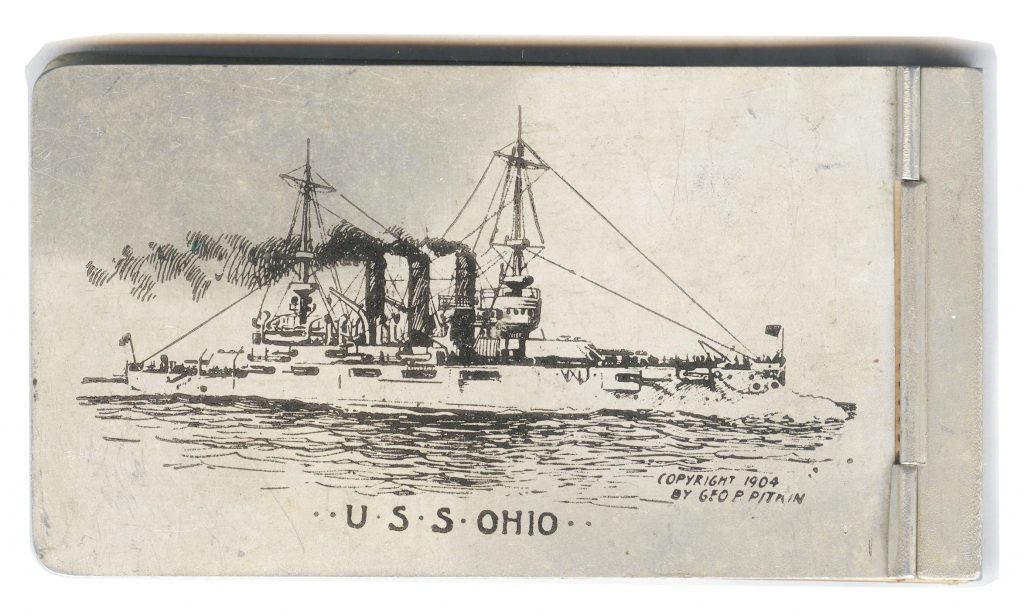 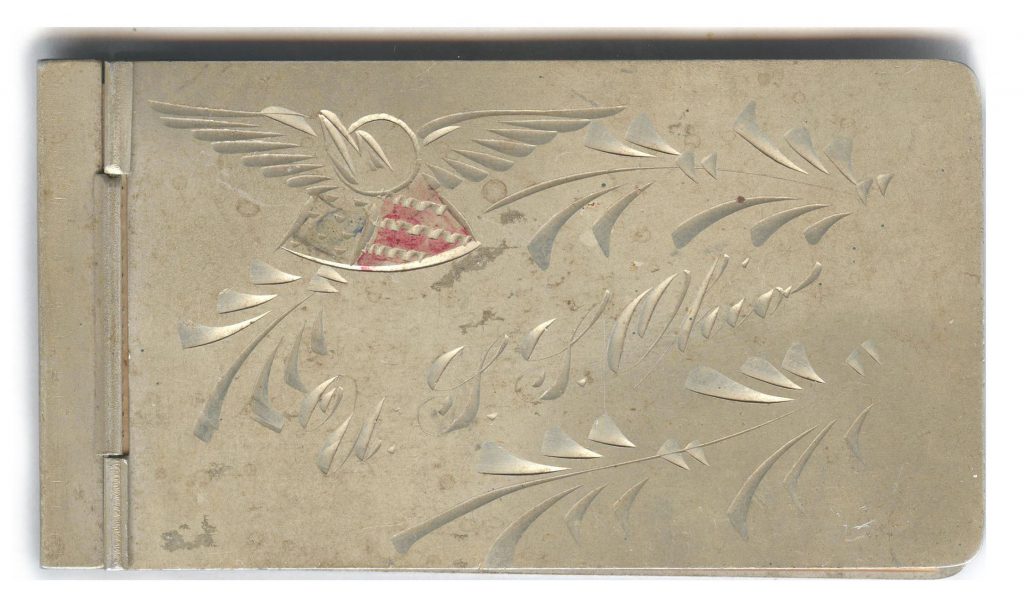 This is a small aluminium notepad with a printed image of the USS Ohio on the front dated 1904 and an engraved decoration with the USS Ohio and an eagle and crest on the back.