On May 9, 1908 Rear Admiral Charles Sperry became Commander in Chief, Atlantic Fleet while in San Francisco.  He had previously bee in charge of Fourth Division on the USS Alabama, but would not switch his flage to the Flagship Connecticut.  The photo below was published in the November 1907 of The Navy, published by The Navy Publishing Company. 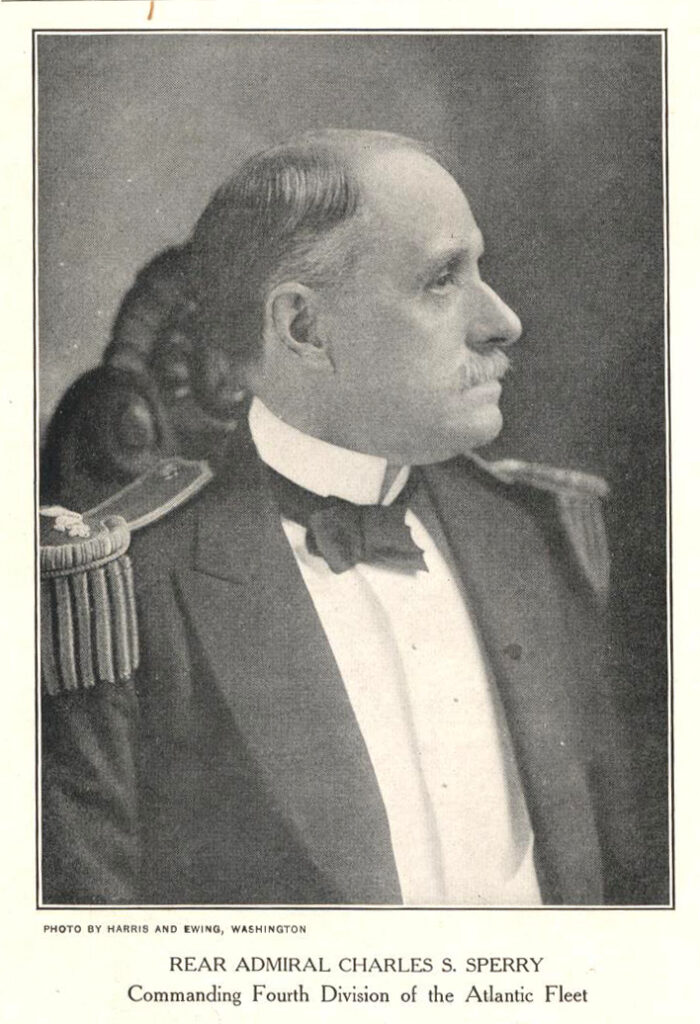 Charles Sperry was born in Brooklyn, NY on September 3rd, 1847.  He entered the Naval Academy in September 1862 and graduated in 1866.  His first assignment was on the Sacramento from 1866 to 1867.  Sacramento was a sloop-of-war that was commissioned in 1863 and served in the Civil war from 1863-65.  Her primary tasks were controlling Confederate shipping operations.  In September of 1866 Sacramento was assigned to special service in Chines and Japanese waters.  On her way, making passage down the African coast Sacramento grounded on June 19, 1867 and was wrecked.  All hands from the Sacramento were saved and brought back to New York.  He was next sent to the Boston Navy Yard for ordnance duty, then to the Kearsarge in the Pacific Fleet.  He was then commissioned as a lieutenant in 1870 and assigned to the Flagship Worcester of the North Atlantic Fleet.  Worcester was a bark-rigged screw steam sloop-of-war commissioned in 1871 and served in the North Atlantic Squadron from 1872-1875.  From 1874-78 Charles Sperry was stationed at the Naval Academy, following he went to the Richmond for three years on the Asiatic Station.  In 1881 he returned to the Naval Academy for three years until 1884. 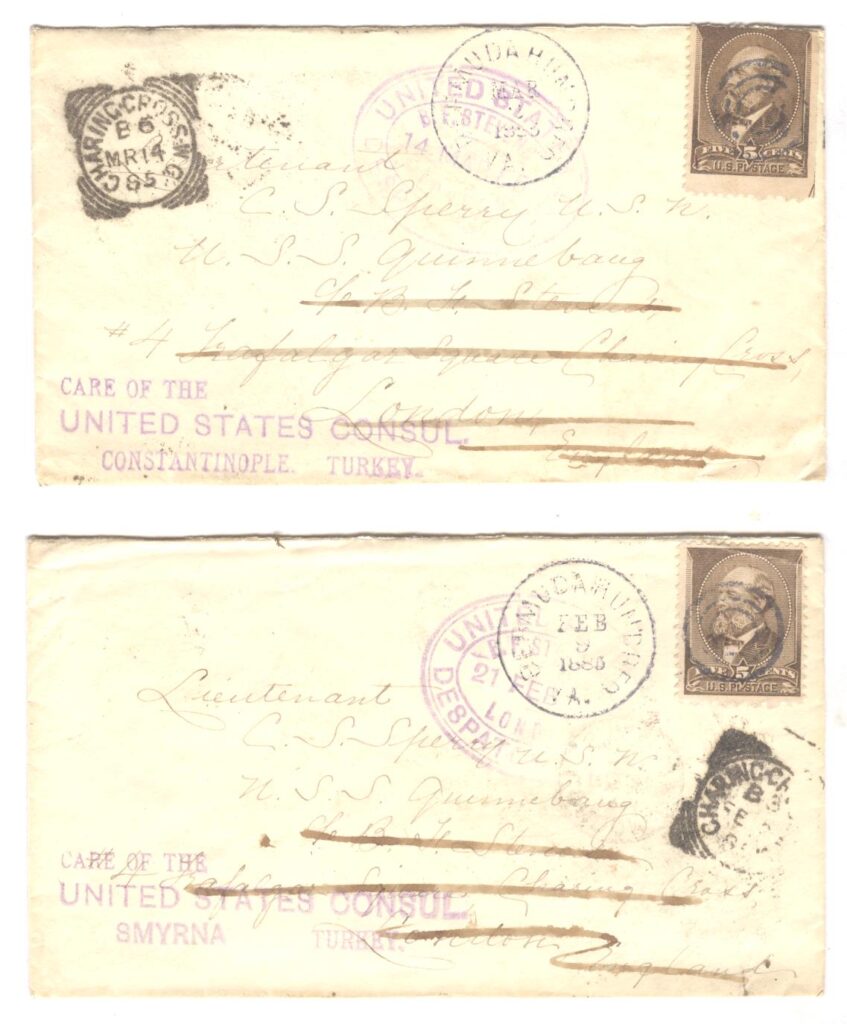 In 1884, after finishing his tour at the Naval Academy, he was transferred to the Quinnebaugh for 3-years.  The Quinnebaugh was a screw corvette launched in 1875 and commissioned in 1878.  She arrived on station in the Mediterranean on February 2, 1879.  During her service on European Station she visited numerous European and African ports.  She also made an annual cruise along the Atlantic Coast of Europe visiting ports in Spain, Portugal, France, England, Denmark, and Germany.

The two envelopes, and one letter, are from Edith Sperry, Charles's wife and are both dated in February of 1885.  Both were received in Smyrna, Turkey after passing through London, England.  They were received by the United States Consul in Constantinople (now Istanbul) Turkey and Smyrna (now Ismir).

I did not half answer your long interesting letter in my hasty note sent Thursday and might I fear I shall not have much better luck for the hour is late and the baby is decidedly restless.

He has a bad cold still but seems better tonight.  I trust he will sleep well and let me get a good rest for last night he was very uncomfortable. . . . . . 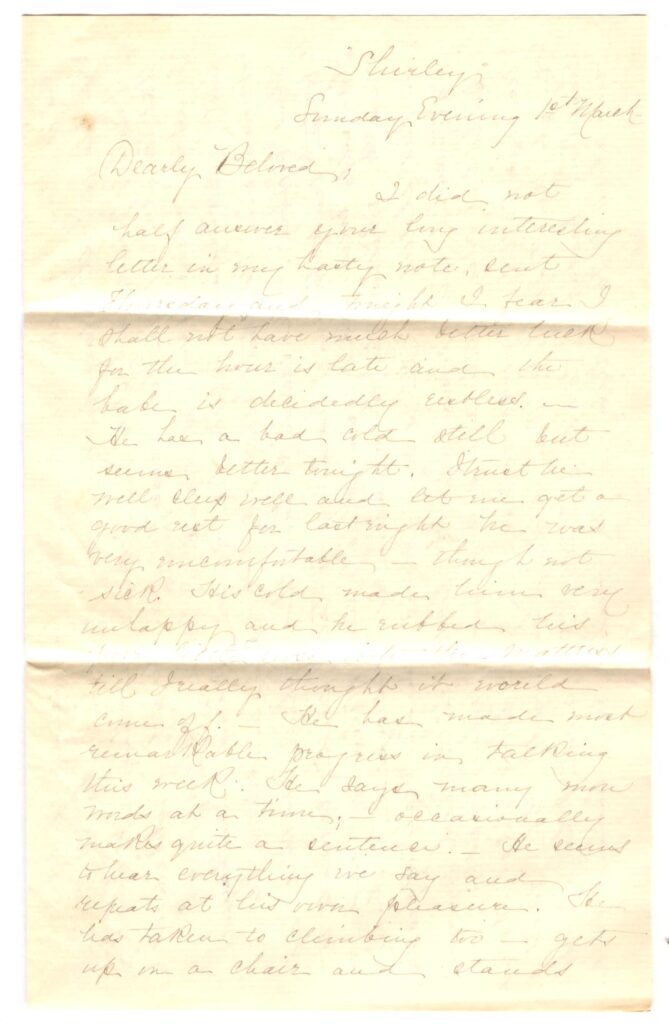 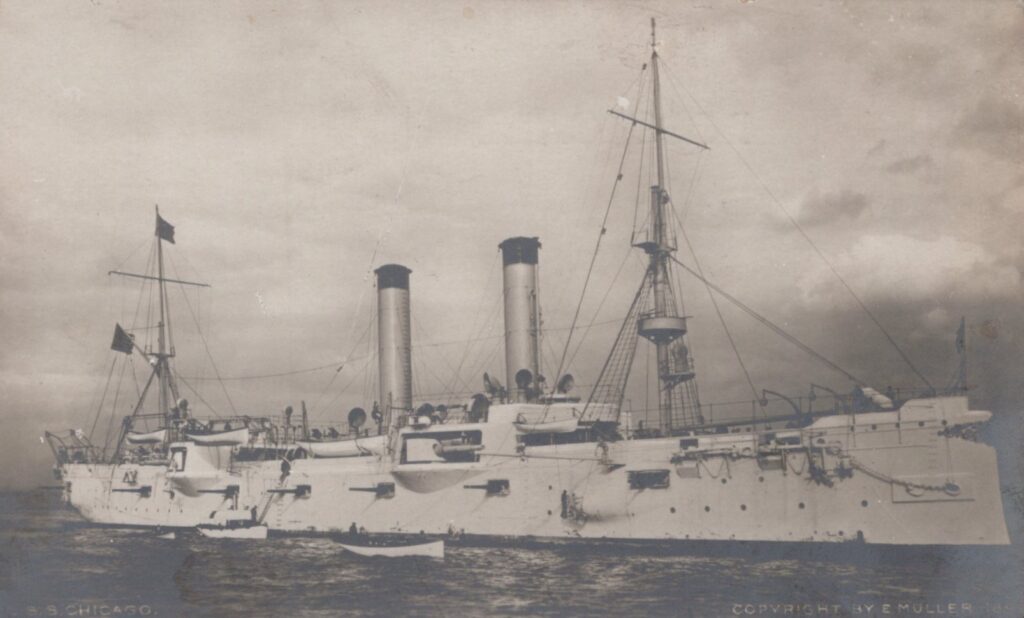 In March of 1885 he was promoted to Lieutenant Commander and in 1887 he returned from Europe to serve 4 more years at the Naval Academy.  From July 1891 to May 1893 he was on the Chicago.  The USS Chicago was a protected cruiser as one of the Navy's first four steel ships known as the "ABCD" ships, Atlanta, Boston, Chicago and Dolphin.  They were all built by the Delaware River Iron Ship Building and Engine Works of Chester, Pennsylvania.  She was built with sail rigging and capable of carrying 750 tons of coal.

Her first trips were to Lisbon, Portugal in 1889 and then cruised the Mediterranean as flagship of the Squadron of Evolution until May 1890 when she let to sail to Brazilian and West Indian port before arriving back in New York in July.  Chicago operated along the east coasts of North and South America and in the Caribbean as Flagship of the Squadron of Evolution - and later as flagship of the North Atlantic Squadron until 1893.  She returned to New York to participate in the naval parade for Admiral Dewey in October 1899.

In 1898 he took command of the USS Yorktown and sailed for the Far East on January 7, 1899.  With the thought of Germany taking Samoa, Yorktown stayed in Hawaii for a few weeks.  She then resumed her voyage to the Philippine Islands to patrol for gun-runners supplying the Insurrectos.  During this time both Harry E. Yarnell and William Harrison Standley, future Admirals, served on the Yorktown.  In 1899 with the start of the Boxer Rebellion, Yorktown was sent to operate off the coast of North China.  She departed Manila on April 3, 1900 and put a landing force ashore upon arriving at Taku, China.  In addition Marines from Yorktown participated in the actions at Tientsin between June and July 1900.  Under the command of Commander Edward D. Taussig from June 1900 to June 1901, she continued to support the China Relief Expedition forces.

Yorktown departed the Far East in early 1903 and was decommissioned and overhauled.  In October 1906 she was recommissioned.  In May of 1908 Yorktown hosted the Secretary of the Navy, Victory H. Metcalf, to receive the arrival of the Atlantic Fleet in San Francisco Bay.  The fleet arrived on May 6th and the flagship Connecticut saluting the secretary's flag on the Yorktown with a seventeen gun salute. 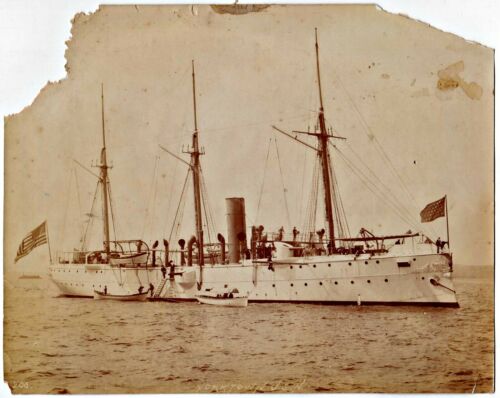 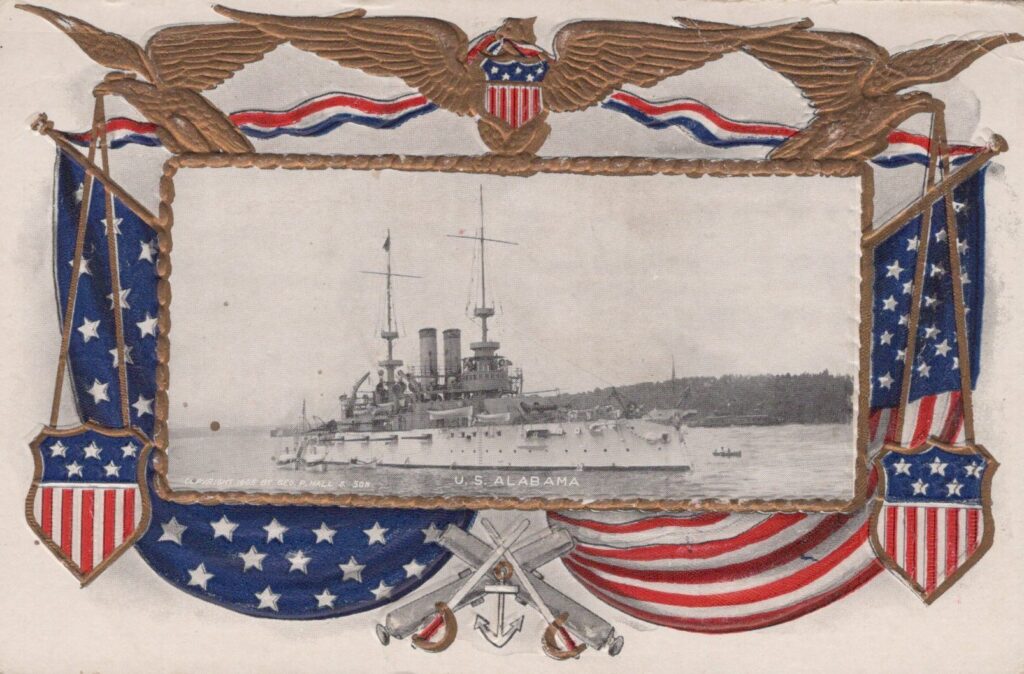 Charles Sperry went on serve as the senior officer of the Southern Squadron on the Asiatic Station and president of the Naval War College in Newport.  As rear admiral he served in the United states delegation to the Geneva Convention and the Second Hague Conference. 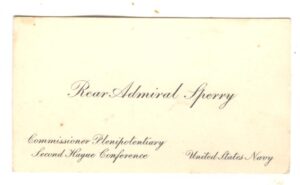 At the departure of the Atlantic Fleet from Hampton Roads in December 1907, Rear Admiral commanded 4th Division from the USS Alabama which included the Illinois, Kearsarge and Kentucky.

Alabama was an Illinois-class battleship built at the William Cramp & Sons Shipyard and commissioned in 1900.  She was armed with a main battery of four 13-inch guns and had a top speed of 16 knots.  Unfortunately, do to damage to her machinery, and excessive use of coal, she would leave the cruise in San Francisco and proceed with the Maine ahead of the fleet on a similar trip to return to Hampton Roads.  After the cruise she received extensive modernization and was used as a training ship in the Atlantic Reserve Fleet through World War I.  She was sunk in test by the U.S. Army Air Service in 1924.

On May 9th, 1908 Admiral Evans' flag was lowered from the mast of the USS Connecticut while in San Francisco Bay and retired.  A thirteen gun salute was fired echoing off the surrounding hills.  Admiral Evans was too ill to attend the ceremony, but on each ship in the harbor his final orders were read:  Evans expressed his regret for leaving the fleet and his appreciation for the loyal support he had received from the officer and men of the fleet.  Rear Admiral Charles S. Sperry took over command of the Fleet.

Below is a glass serving plater depicting the Battleship Fleet with both Admiral Sperry and Evans in Gold.  This plate is dated at the bottom 1908 so it must have be manufactured after the relief of Admiral Evans and probably before the Fleet depart from San Francisco on the world trip.  At the top is says "The Pacific Fleet" which is odd, because the ships were all the Atlantic Fleet. 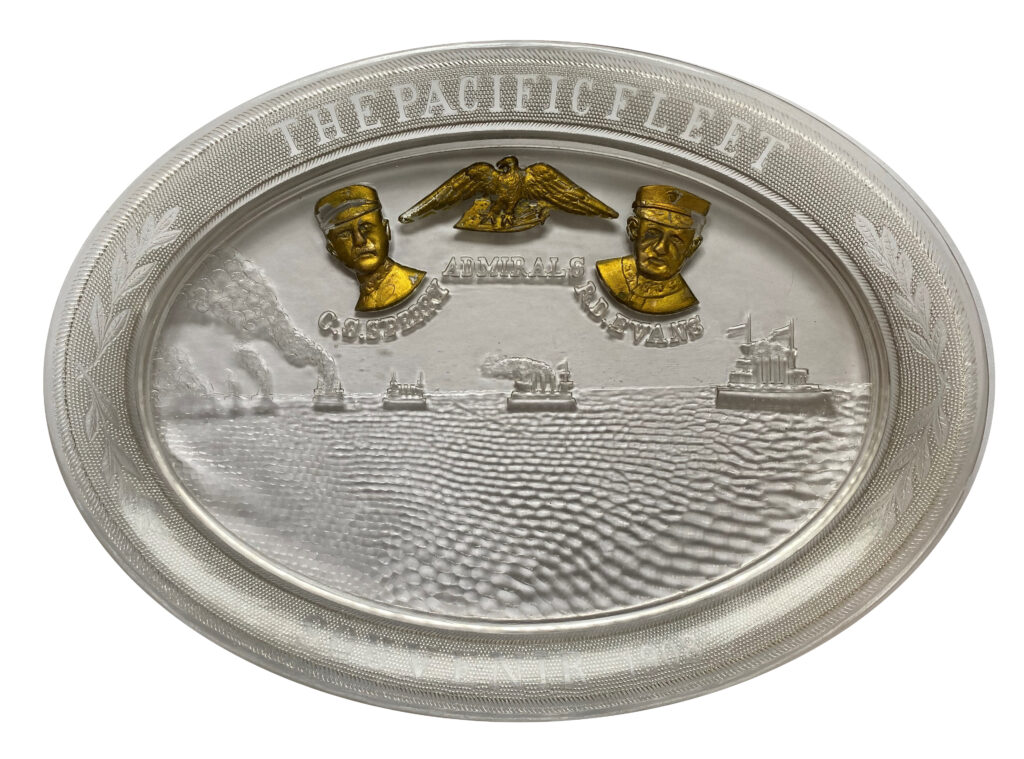 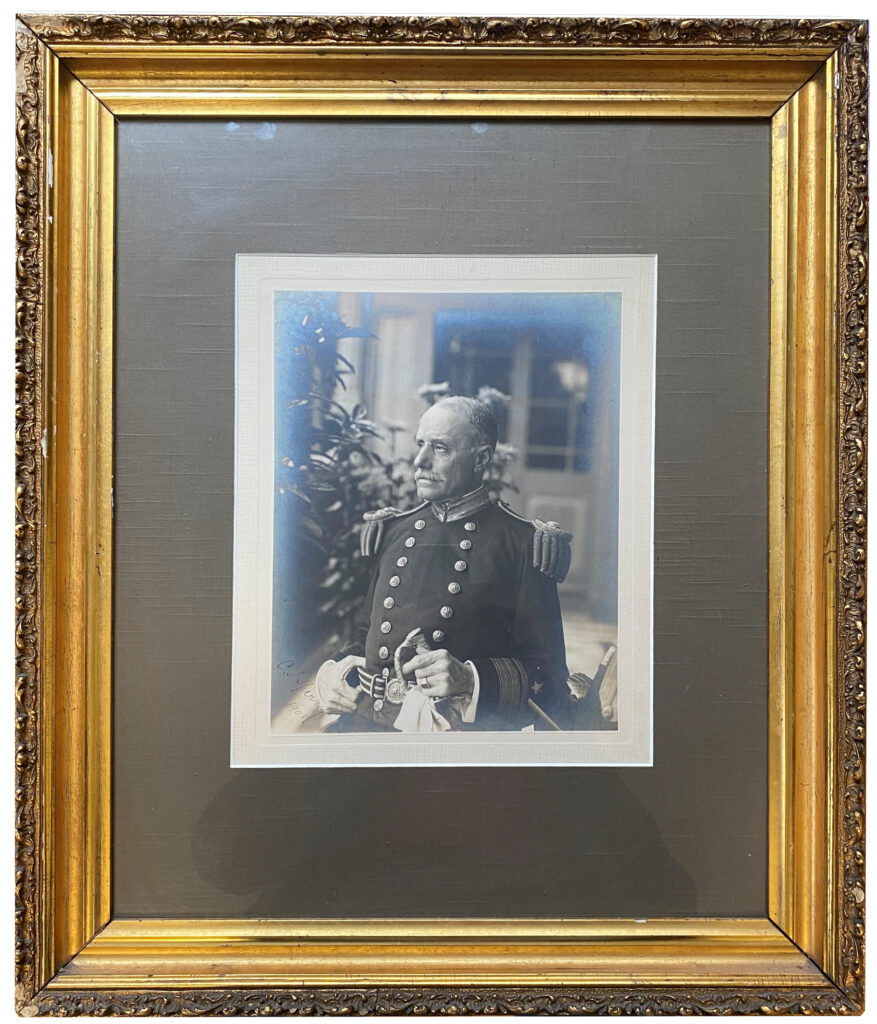 The fleet arrives in yokohama

The Japanese greeted the fleet with waves of postcard celebrating their visit.  But in a letter from President Roosevelt upon departure from San Francisco, he is particularly concerned about incidents that might occur during the port visit in Japan.  "You are to take the fleet back, and it will be an even more responsible voyage than the outward one, for you are to visit Australia and Japan, as well as coming home through the Suez.  I need not tell you that you should exercise the most careful watch thruout the time that you are in Oriental waters - for you will naturally exercise the most careful watch at all times both before and after you leave the Orient.  I wash to impress upon you, what I do not suppose is necessary, to see to it that none of our men does anything out of the way in Japan.  If you give the enlisted men leave while in Tokio or anywhere else in Japan be careful to choose only those upon whom you can absolutely depend.  There must be no suspicion of insolence or rudeness on our part."  (reference link)

At left is an original portrait photograph of Rear Admiral Sperry taken at Tokio by Mitsukoshi & Company during the October 1908 visit of the fleet.   On back of the photo in period handwriting, "This photograph was taken at Shimba Palace, Japan - October 1908.  Included is Sperry's calling card as Commander in Chief, United States Atlantic Fleet. 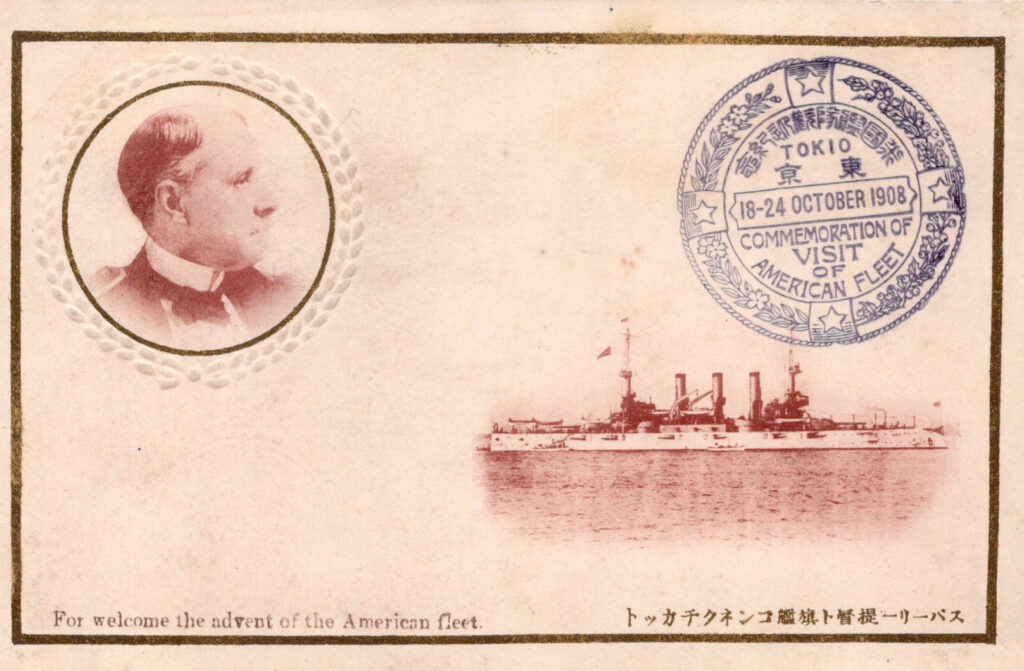 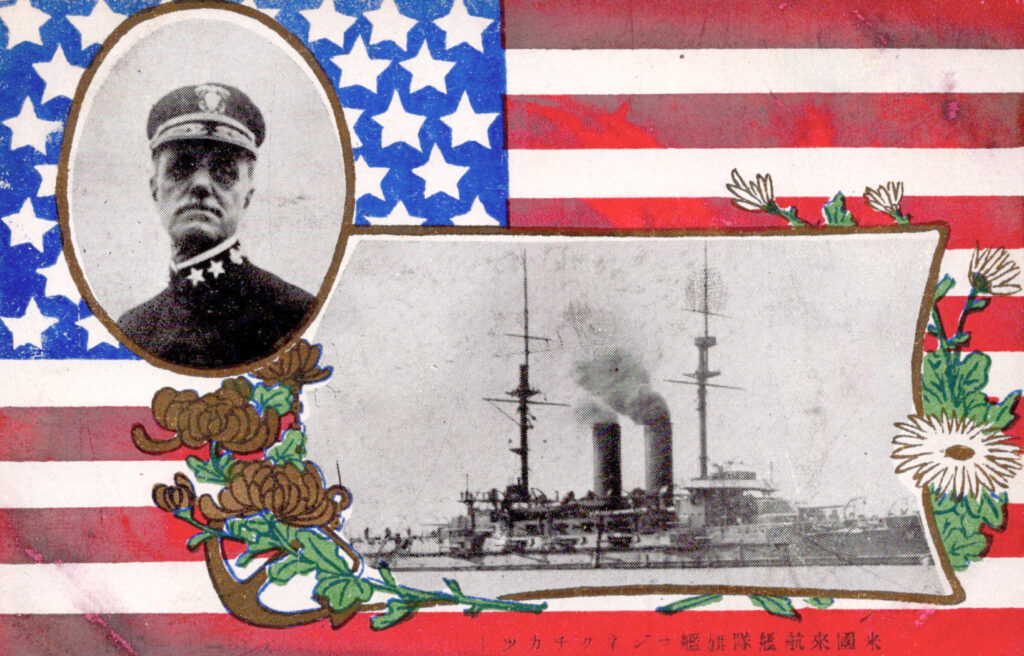 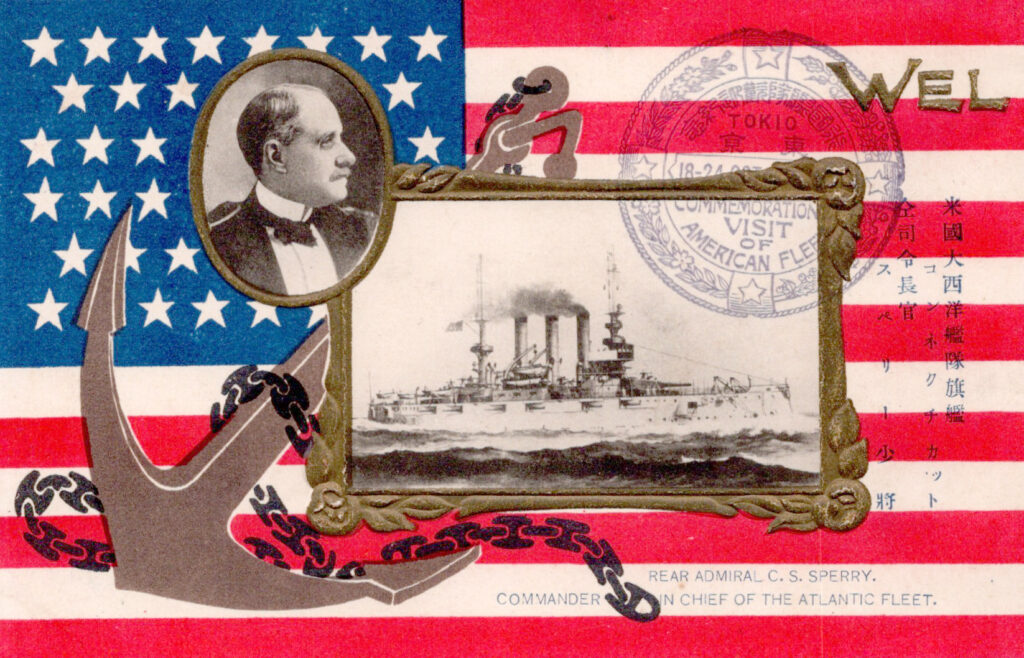 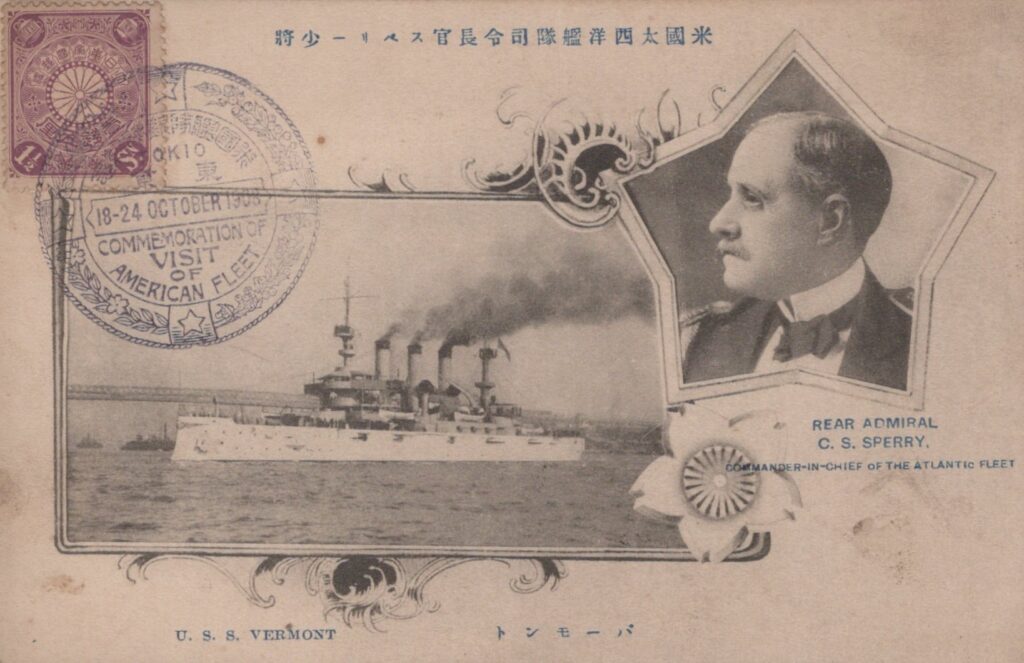 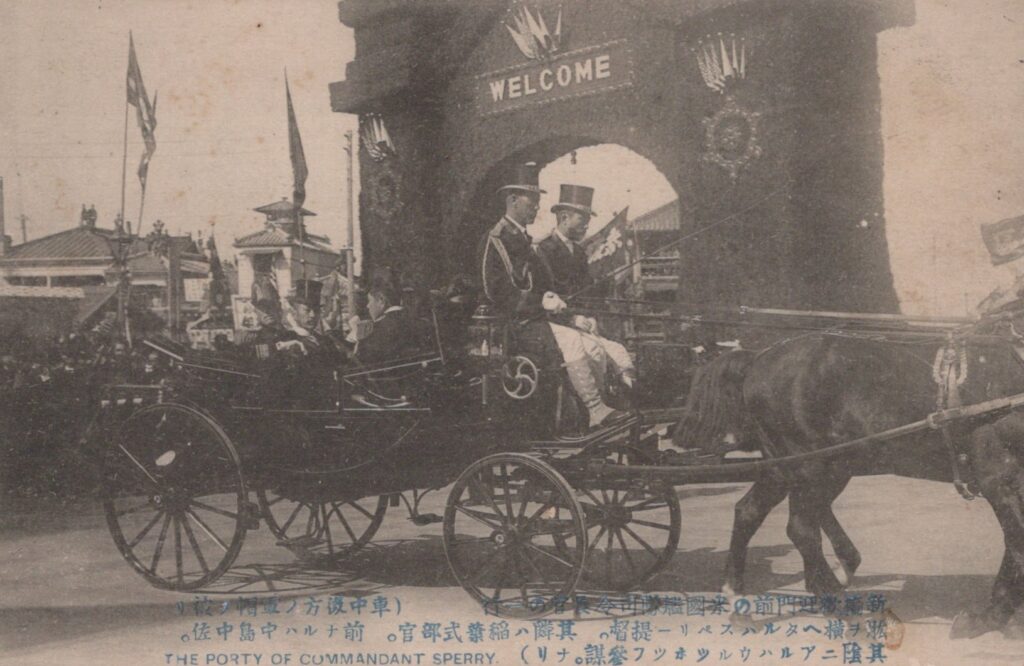 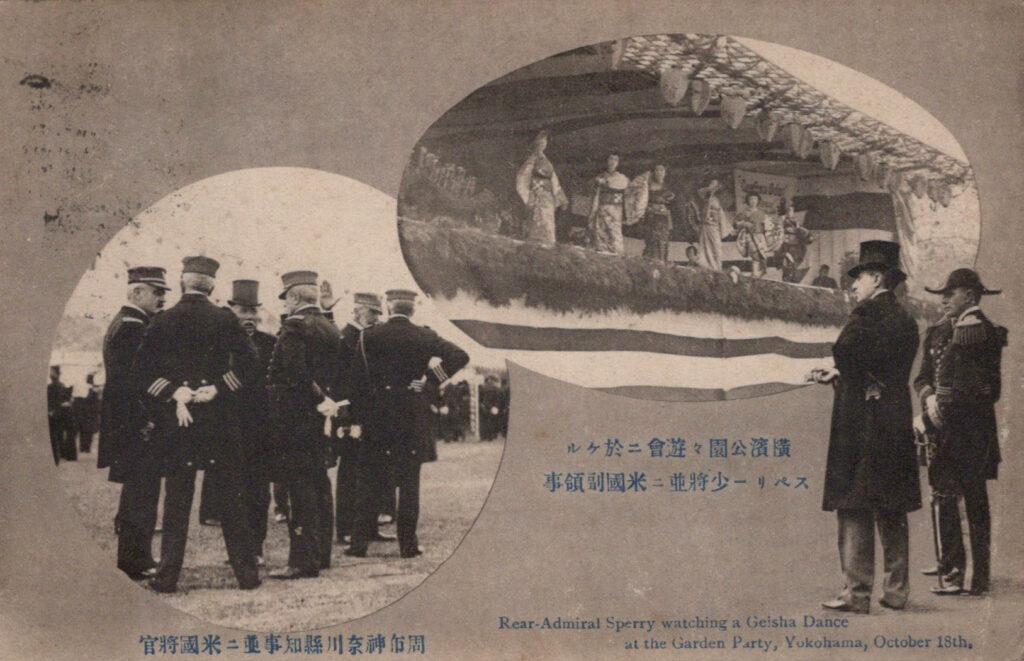 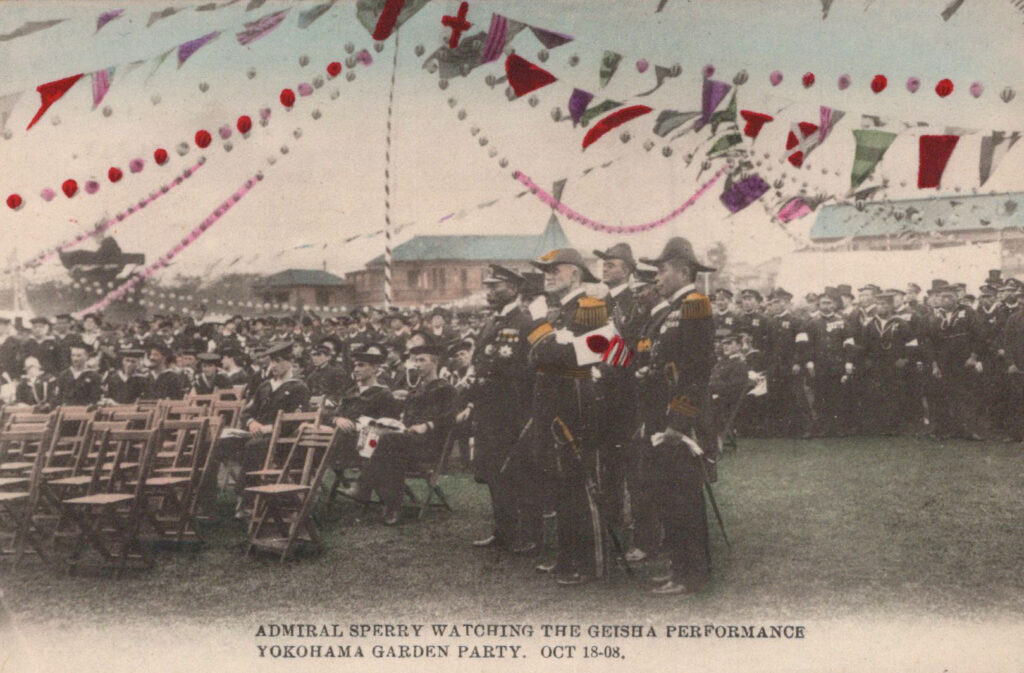 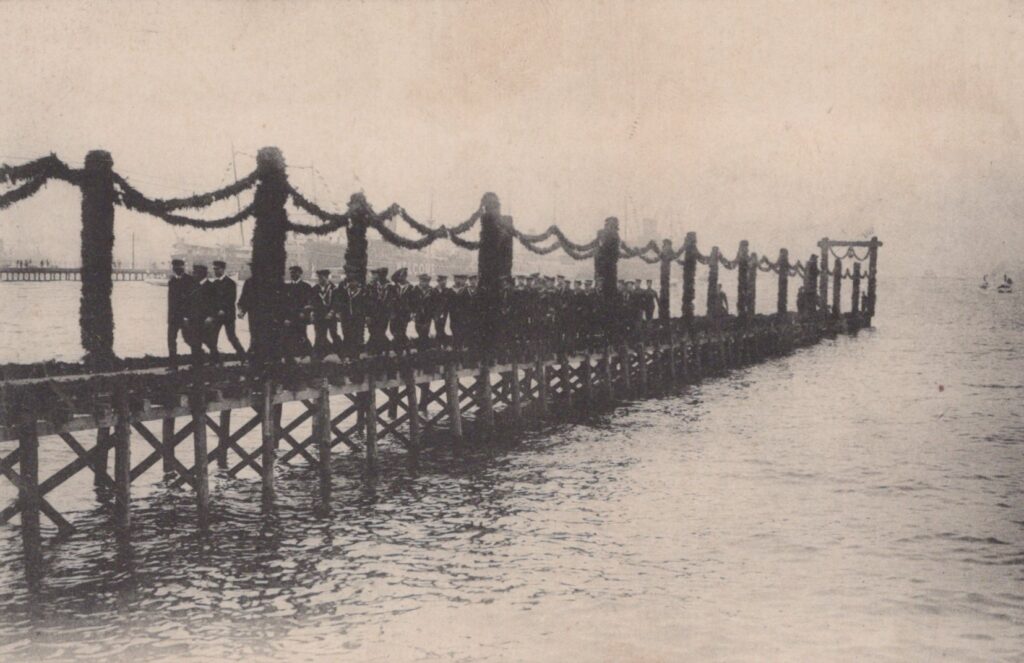