William H. Emory Jr. was the son of of General William Hemsley Emory, Union General of the Army of the Potomac in 1862 during the Civil War.  He later commanded a division in the Port Hudson campaign, Commander of the Nineteenth Corps at Shenandoah Valley Campaign of 1864 and the Battle of Cedar Creek.  General Emory was a fighter and known in the Army as "The Tiger".  At Cedar Creek he had two horses killed under him.  At the end of the War he was a Major General.  He had 10 children,  His eldest son was a Lieutenant Colonel Campbell Dallas Emory served in the 9th Infantry under General George Meade in the Civil war and William H. Emory Jr., entered the Naval Academy in 1862 and graduated Class of 1866 who would rise to be a Rear Admiral and Division Commander of the Great White Fleet. 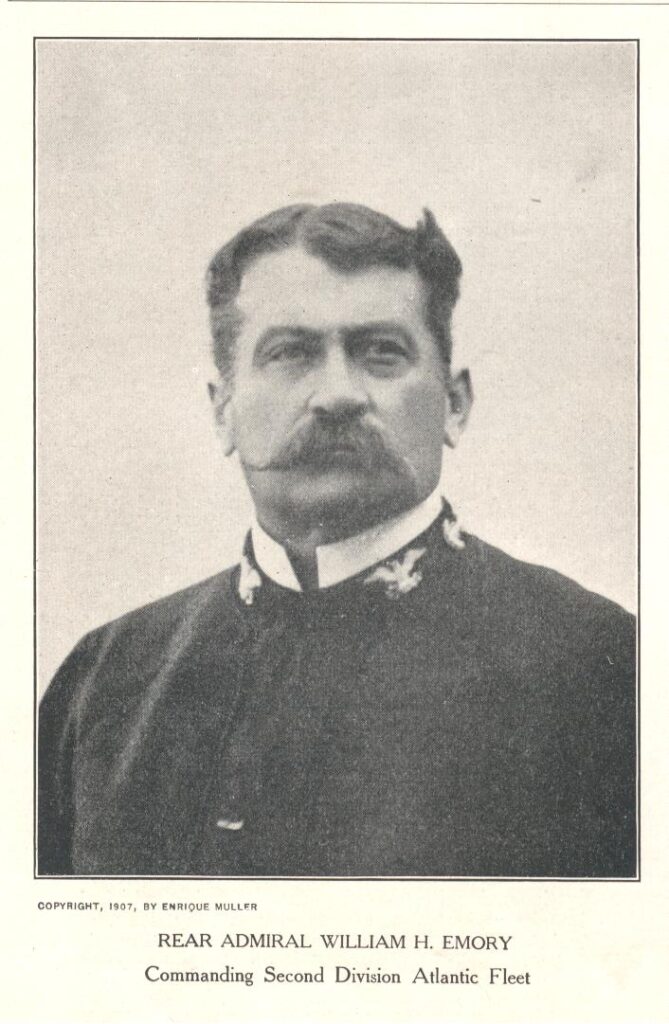 He was born December 17, 1846 in Washington DC, and at the early age of 16 he made a personal appeal to President Lincoln for an appointment to the Naval Academy by sitting outside his door.  His mother had lost two brothers at sea and refused to support his request so he went directly to the President who intervened and he was appointed to the Academy of September 23, 1862.

His early midshipmen cruise was on the Macedonian patrolling during the Civil War and  the next summer visited his father's headquarters in the Shenandoah Valley where he saw active service.

His first assignment was to the Iroquois, a small steam-and-sail vessel station at Asiatic Station and then the Maumee before returning to the United States and served routine duties until 1872.  At this time he was detailed to the Asiatic Station to the staff of Rear Admiral Thornton A. Jenkins, Commander-in-Chief on the steam frigate Colorado.

His next assignment, in 1874, was to the staff of Rear Admiral Worden, Commander-in Chief in the Mediterranean on the flagship Franklin.  It is here where he met his wife at a party in Villefranche.

In 1876 he was assigned to the Naval Academy as an instructor in seamanship.  Following which he joined the Staff of Admiral Howell on the Flagship Trenton in the Mediterranean.

aide to the admiral of the navy

William Emory became aide to Admiral Porter in 1881 as a lieutenant, the stagnation of appointments after 15-years of service.  In 1884 Emory to command of the USS Bear under squadron command of Winfield Scott Schley in the Greely Relief Expedition which had been stranded in the North Pole.  The mission was a success and Greely and his party were found.  Greely died before he could be returned to the States. 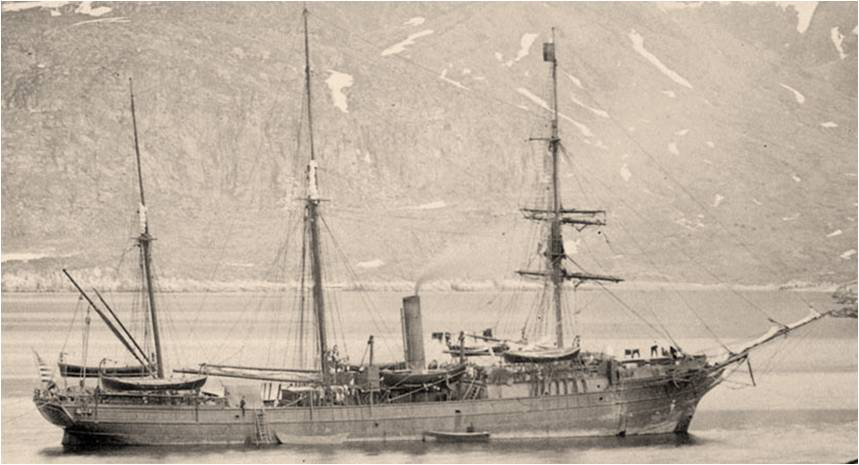 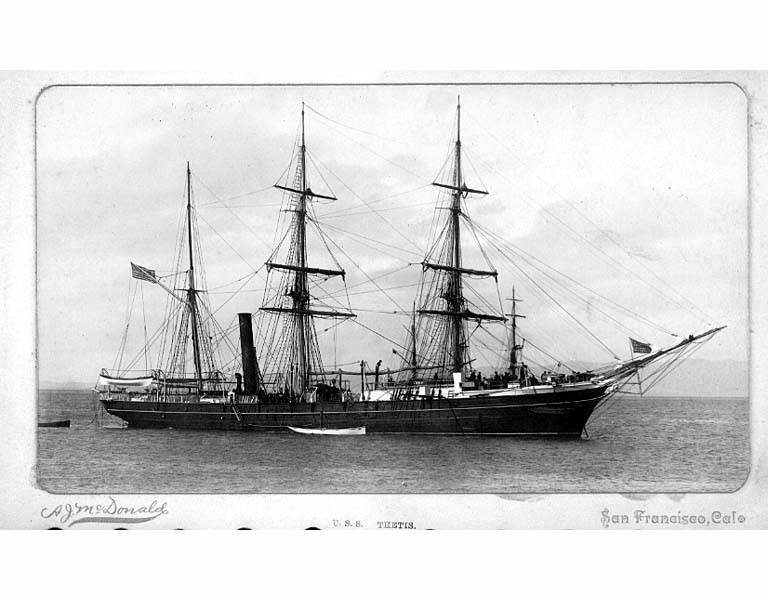 The ship that had led the expedition to find Greely was William's next command.  On January 15, 1887 he assumed command at the New York Naval yard with a goal of going to protect fishing rights in Alaska.  On his journey to Alaska, William wrote a letter to Mr. Whitney, Secretary of the Navy:  "Since my arrival in San Francisco up to the present time, the topic of conversation amongst maritime men in every port has referred to the  position which our Government would take with regard to the Seal Fisheries in Bering Sea, - whether the captured sealers, American and British, would be released and indemnity paid for them, or whether the Government would confirm the seizures, regard Bering Sea as an interior water, as far as the seal was concerned, and direct its Revenue Cutters to seize all poachers the same as last year."

The next year he took the Thetis to the Artic to support the whaling fleet out of San Francisco.

His next tour will be on the USS Petrel, back to the Bering Sea to continue to support fishing rights of the American ships out of San Francisco.  It later sailed to China Station during the war or 1895 between Japan and China.

From "The Life of an American Sailor: Rear Admiral William Hemsley Emory, Jr.,"  The war with Spain was too short for everyone in the Navy to get into it, and unless an officer of command rank was fortunate enough to be afloat when war was declared, the changes were not many for obtaining a desirable command.  Captain Emory was one of the fortunate ones, and in April, 1898, was ordered to command the Yosemite, which was intended for assignment in the Northern Patrol Squadron, under Rear Admiral J. A. Howell operating on the New England coast."  Yosemite had been recently purchased and renamed to support the fleet as an auxiliary to Rear Admiral Sampson's fleet. Yosemite's first duty was to escort the USS Panther carrying Marines to Guantanamo Bay.  Yosemite's landing craft brought the first marines ashore for combat.  In June 1898 she was involved in a failed attempt to capture the Spanish ship Purissima Concepcion.  This followed by an uneventful tour on the training ship Monongahela. 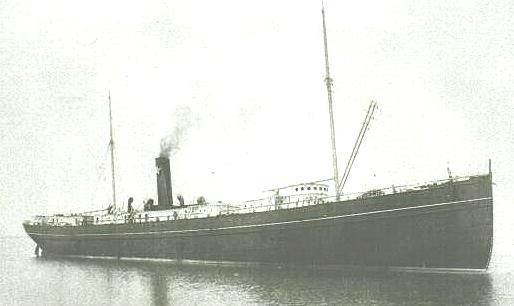 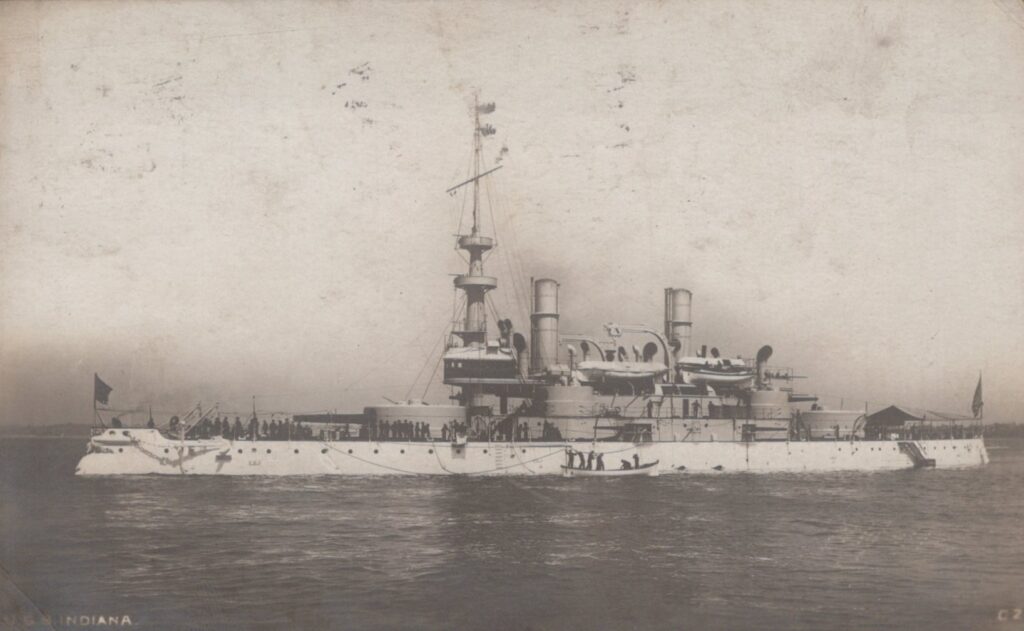 On August 29, 1901, William Emory took command of the USS Indiana which was now a training ship and dedicated to developing and testing a new system of gunnery.  Much of the time was spent in the Gulf of Paria and the Bay of Guantanamo for target practice.  He worked closely with Lieutenant W. S. Sims, who modernized naval gunnery, to score 18 out of 24 shots in target practice off of Pensacola.  Admiral Dewey, onboard the Mayflower, personally witnessed the performance and recognized it as a level of performance not previously achieved in naval gunnery.  On December 29, 1903, Emory was detached from the Indiana and returned home to await orders.

At left is a "rotograph" postcard taken by Enrique Muller.  To see the entire collection of his work on this site, follow this link.

The next two years of command were of the USS Hancock, a receiving ship at New York.  This, of course, was quite a downturn in his career and not much is recorded about his career during this period.

On the 5th of November, 1906, William Emory was commissioned Rear Admiral and two months later hoisted his flag on the USS Ohio as Commander Second Division in the North Atlantic Fleet.  He was now 60-years old with two years remaining before mandatory retirement.  He had served for 40-years.  During that winter the Division cruised to the Caribbean, and in the Summer between New York and Hampton Roads.  1907 was the year of the Jamestown Exposition and some of Second Division participated in the opening ceremonies.  William Emory, Hampton Roads, July 5, 1907 - "The Navy Department apparently knows nothing whatever of the departure of any Division of the Atlantic Fleet for the Pacific, neither does Evans.  I am perfectly candid and conceal nothing.  If the President intends sending the Fleet or any portion of it to the Pacific he has not told me!  The Georgia will be my Flagship and McCrea will be the Captain.  McGrea is a sailor man and not an academician."

At right, a postcard of the USS Ohio published by Allen Fanjoy for the fleet's arrival in California 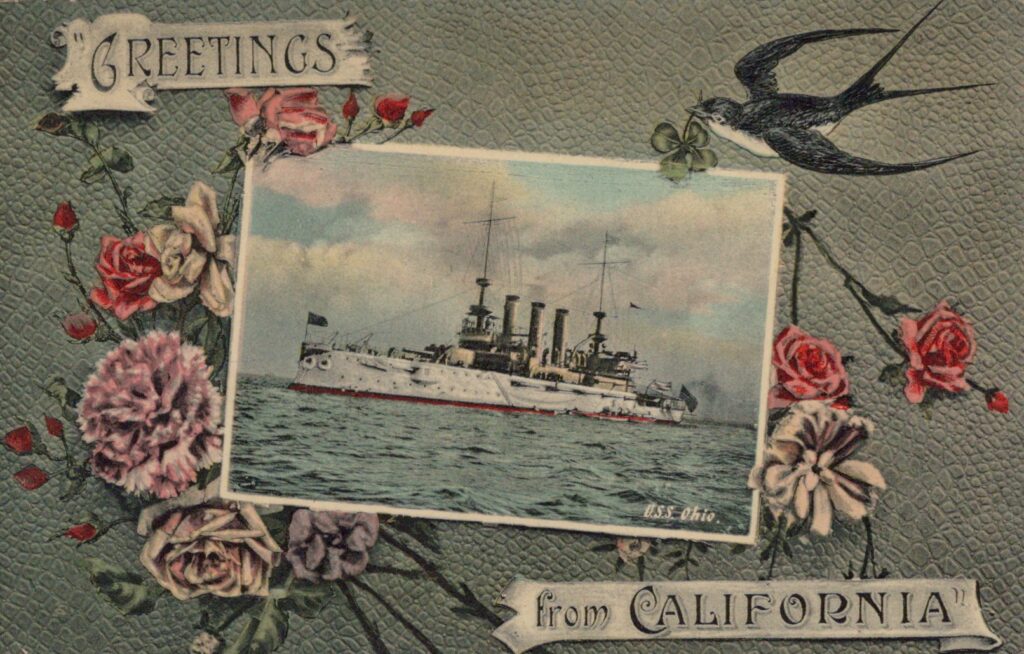 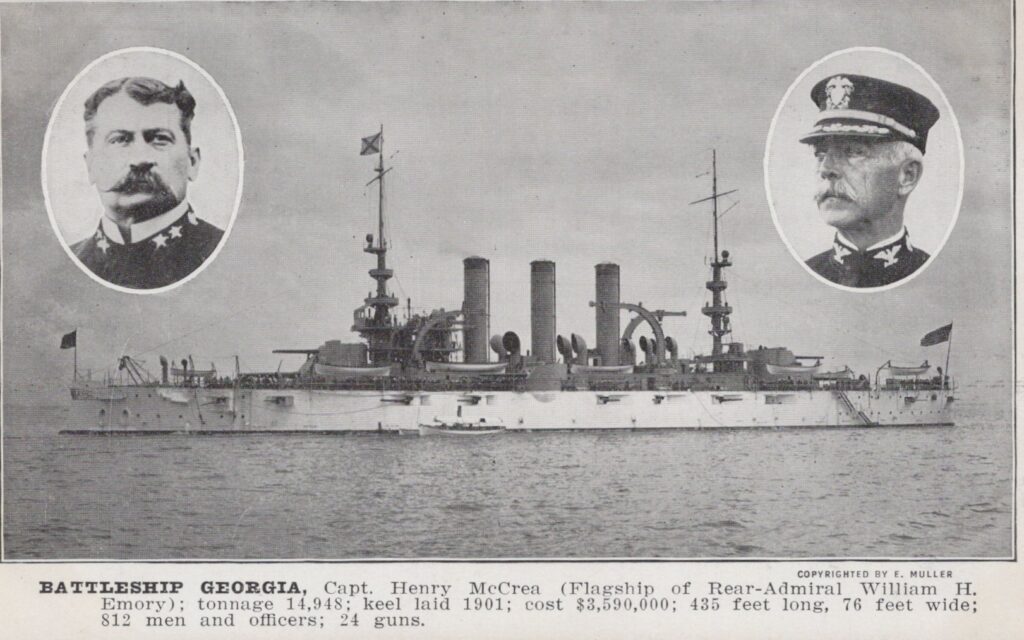 William Emory, Hampton Roads, July 29, 1907 - "I am to go to the 2nd Division with Evans - Flagship Georgia.  Will join the latter in September.  We leave here in the Ohio August 24, 1907, about four weeks from now.  Sperry or no Sperry, I go there."  Roosevelt  "I am more concerned over the Japanese situation than almost any other.  Thank Heaven, we have the Navy in good shape.  It is high time, however, that it should go on a cruise around the world.  In the first place, I  think it would have a pacific effect to show it can be done; and in the next place, after talking thoroughly over the situation with the Naval Board, I became convinced that it was absolutely necessary for us to try in time of peace to see just what we could do in the way of putting a big battle fleet in the Pacific, and not make the experiment in time of war."  On November 18th, 1908, in Hong Kong, China, he hauled down his flag, and on December 7, 1908 after 56-years of service.  He retired.  He died on July 15, 1917 and is buried in Arlington National Cemetery.

At left is a postcard issued by the Lincoln Daily Star, as part of a series, showing the battleship, Division Commander and ship's Captain of the Atlantic Fleet.