December 23, 1907 the fleet enters Port of Spain Harbor in Trinidad for Christmas.  After anchoring and waiting until the next morning, there were no salutes from the fort, no crowds, no concession stands, no brass bands, no small boats racing out to greet the battleships in the harbor.  There were no dignitaries and no ceremonies, Governor Henry M. Jackson, Governor of the Colony, was nowhere to be seen.  At around noon, a single launch with a representative of the Governor made its way out to the Connecticut.  Plans were made for Admiral Evans to meet the Governor at a hotel in town later in the day, which turned out to be stiff and uncomfortable, lasting for a brief 10-minutes.  The British Colonialist had decided to snub the Admiral and the entire shore party. 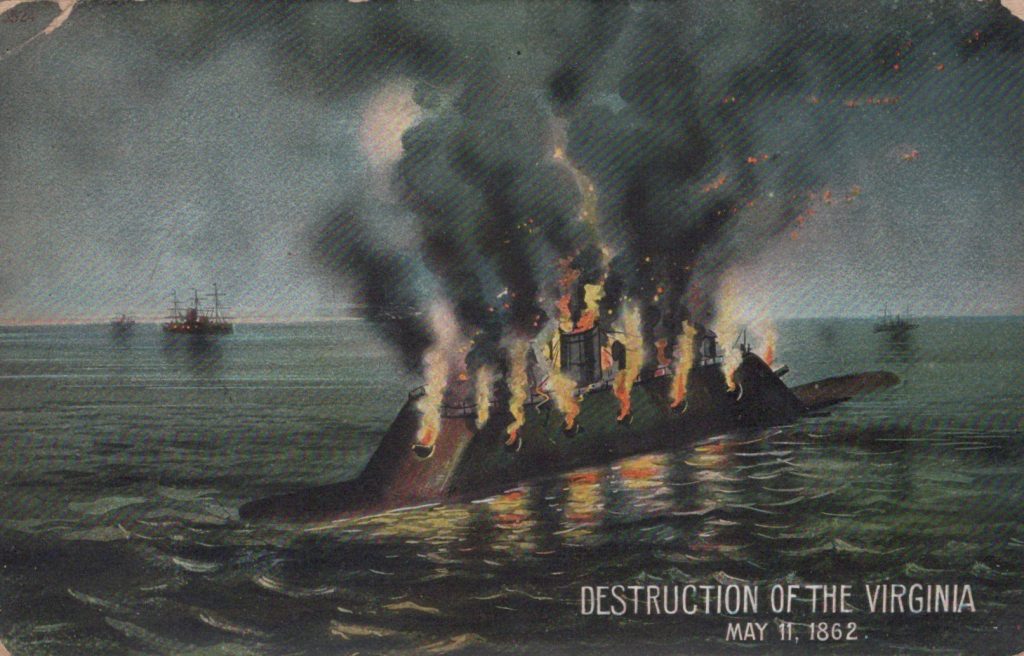 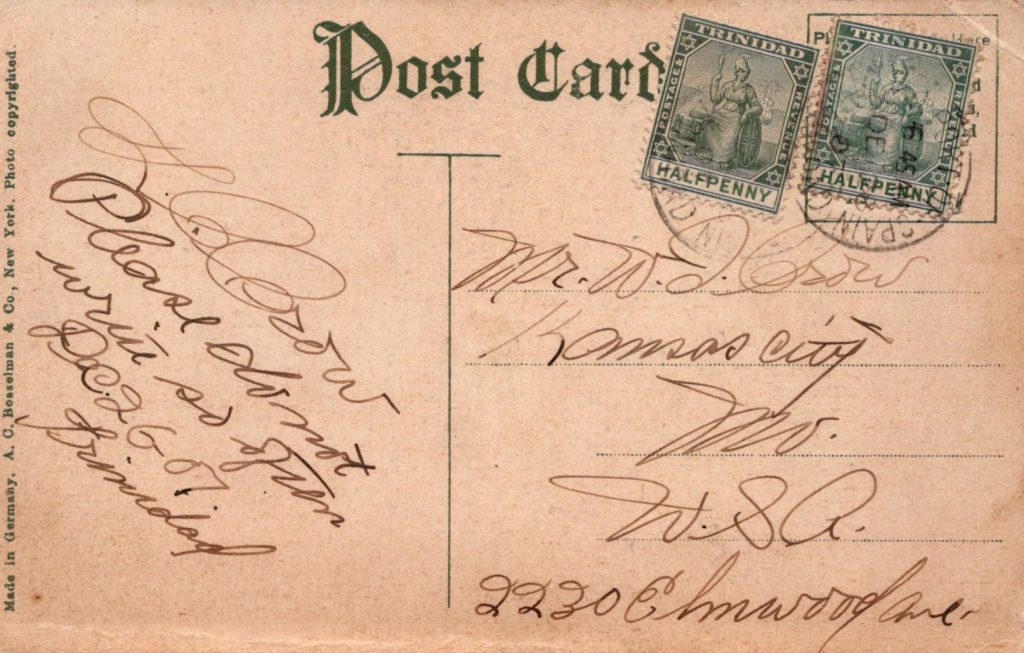 Despite this, Admiral Evans put the fleet's "best foot" forward.  During the cruise south each ship had selected members of the crew to be trained as the Navy's first shore patrol.  With the cool reception he granted liberty to 2000 sailors who went ashore to enjoy the city.  Shopping the markets they found fresh fruit, straw hats, monkeys, parrots, parakeets, and high prices.  As for postcards and souvenirs, there were few items to be found, and very little to commemorate the visit.  Was not the perfect stop for Christmas, but the battleship crews always planned to have a special dinner as shown in the menu below from the USS Nebraska while in Seattle.

At Left, Destruction of the Virginia, May 11, 1862, set by Luther C. Crow, a Second Class Quartermaster on the USS Minnesota to his Father.  "Please do not write so often, December 26, 07, Trinidad.

The card can be linked to the sailor using the reference "Men on Board Ships of the Atlantic Fleet Bound for the Pacific, December 16, 1907. (With home address in the United States).  The address that Luther listed at the start of the cruise is the same as on the card, 2220 Elmwood Ave., Kansas City, MO. 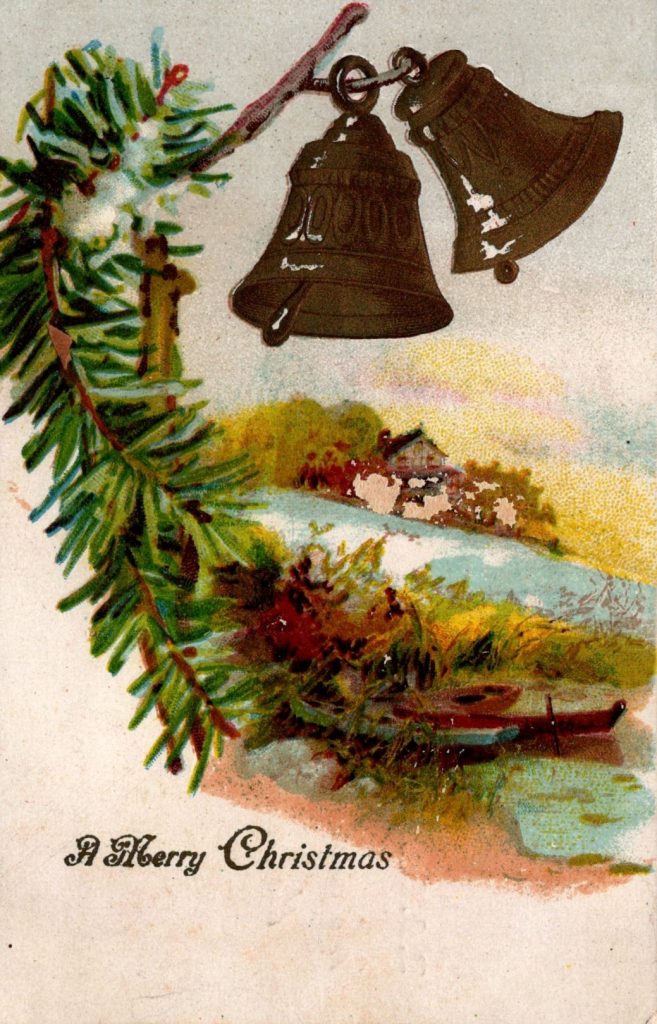 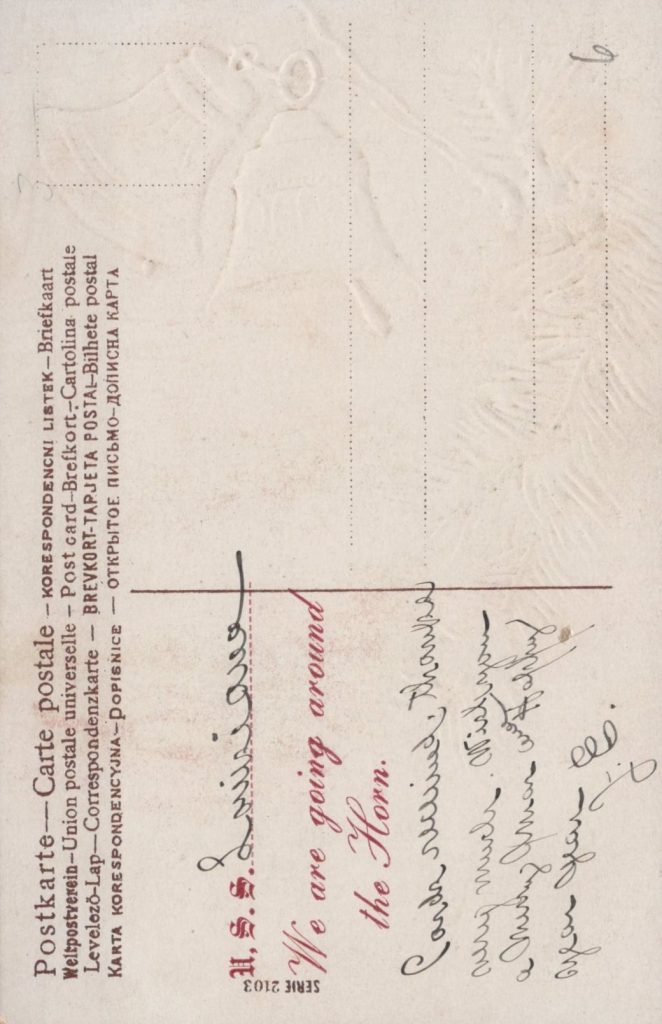 Above, a card from the USS Louisiana, " We are going around the Horn."  "Cards received, Thanks very much.  Wish you a Merry Xmas and Happy New Year, J. E."

At right, a card that was picked up in Trinidad, showing a panorama, and then mailed while in Callao, Peru to Miss Rosiole Trojano of Plainfield, NJ. 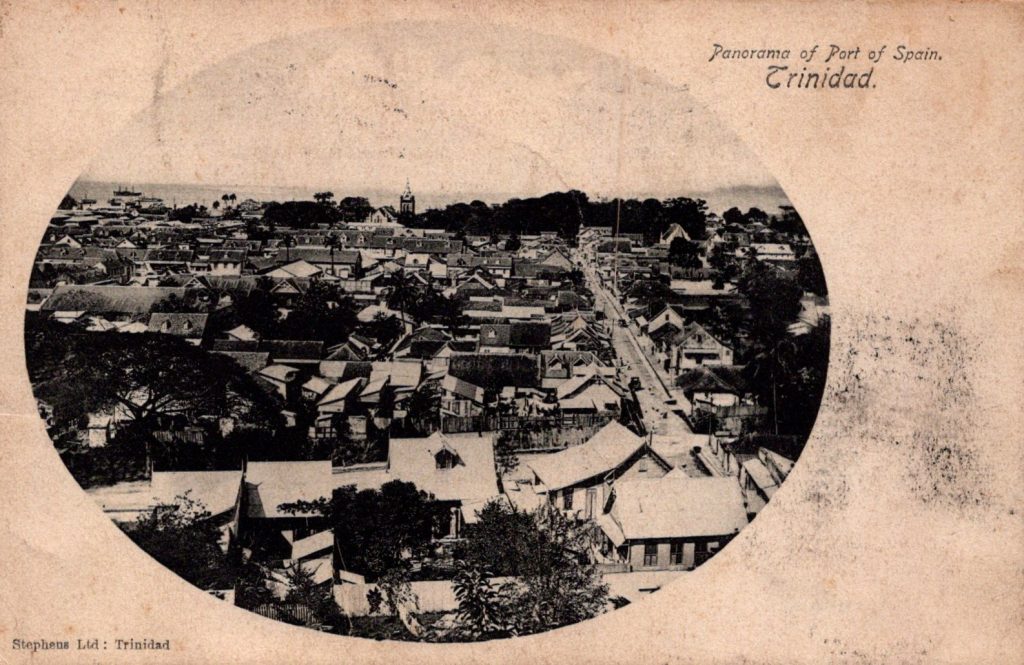 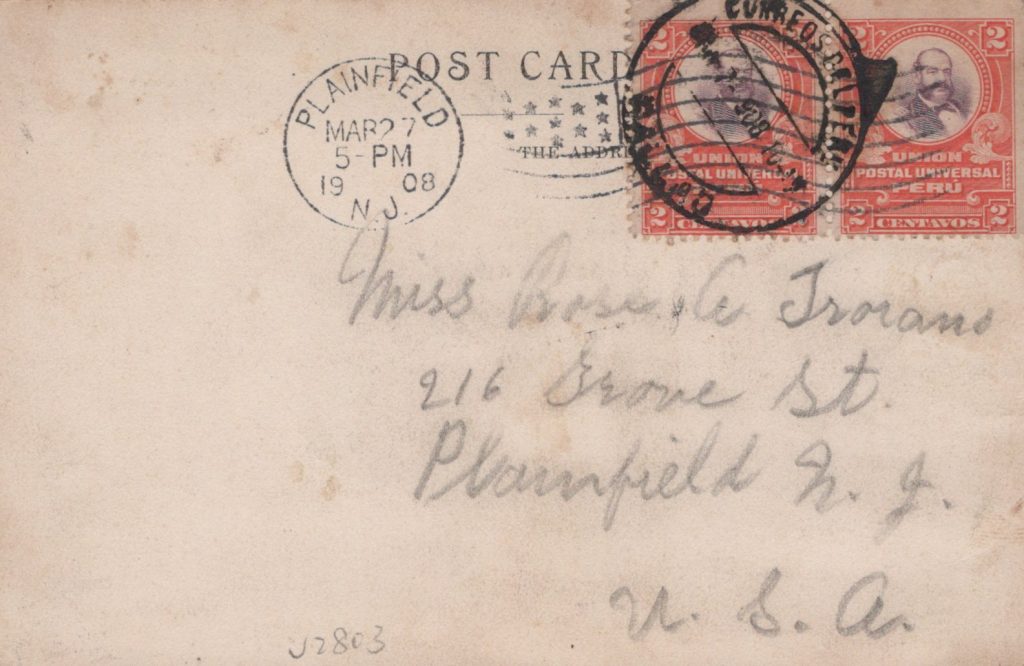 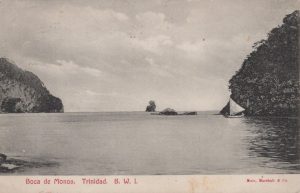 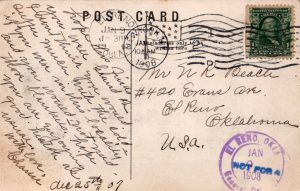 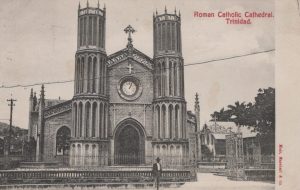 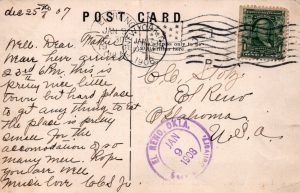 These two cards were mailed by Charles Stotz, USS Illinois just before Christmas with American postage.  They were received in Oklahoma by January 9th by way of New York City.  These are difficult cards to find because they show that the fleet accepted mail for sailors from this port and transported them by boat back to the States to get them mailed for the holidays.  "Well Dear Father, Were here, arrived 23rd 6 pm.  This place is pretty nice little town but hard place to get anything to eat.  The place is pretty small for the accommodation of so many men.  Hope you are well.  Much love,CCS jr." 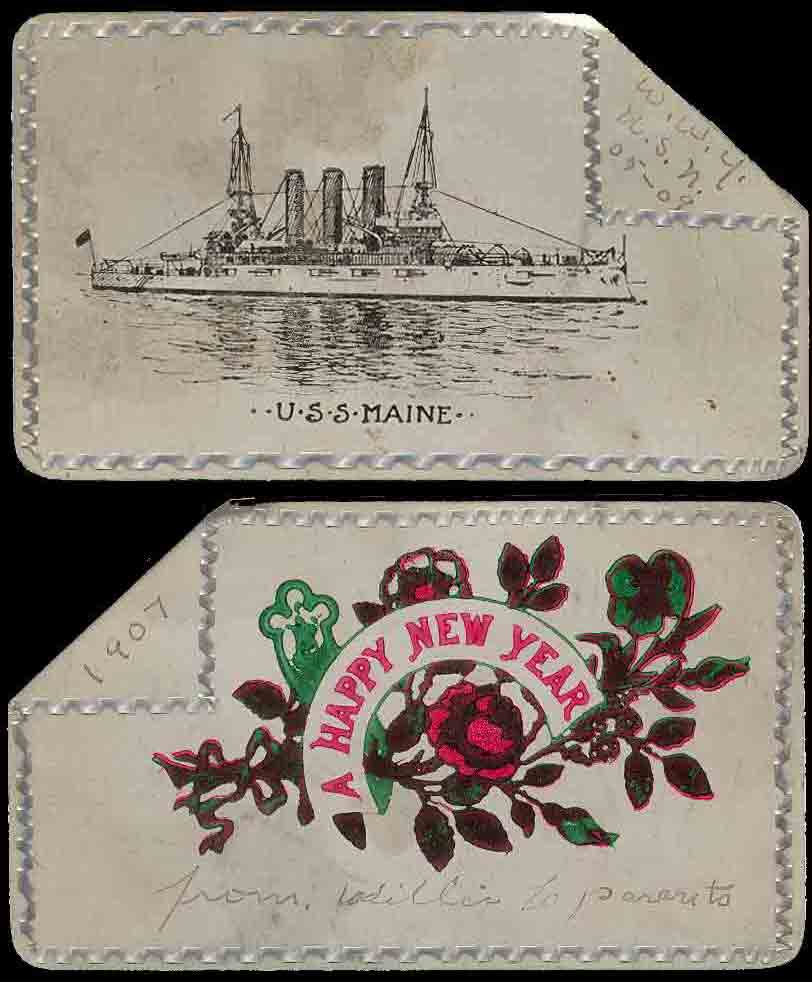 These aluminum cards are rather unique.  There were two different sizes that I have found and some made as notebooks.  All of them have a printed image of one of the ships on one side and the greeting on the opposite side. All of them have an etched border that is the same with the folded page.  I have found them from multiple ships over a two year period, but I am not sure of their source.  Possibly a sailor onboard one of the ships was having them made?

These two cards, from the cruise, one from the Maine, which did not continue the cruise after San Francisco, and one from Minnesota with holiday greetings from Trinidad. 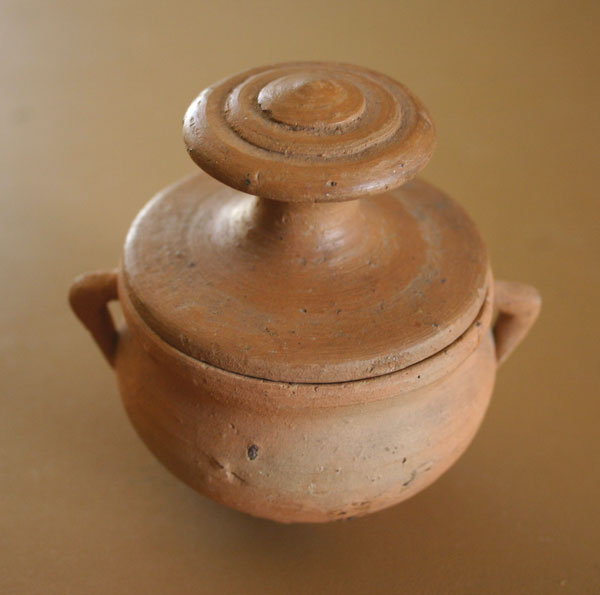 The above piece of pottery was brought back by Frank Lesher from the cruise.  It is a small clay spice jar that was well preserved.  To see more of the Frank Lesher collection, follow this link. 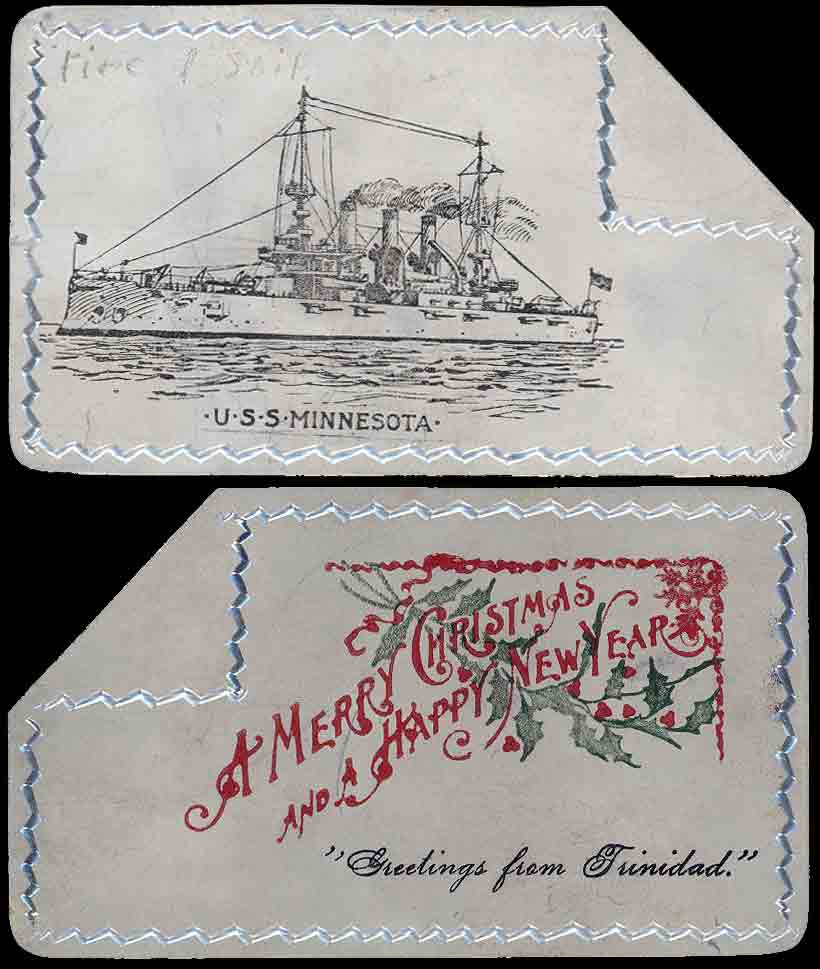 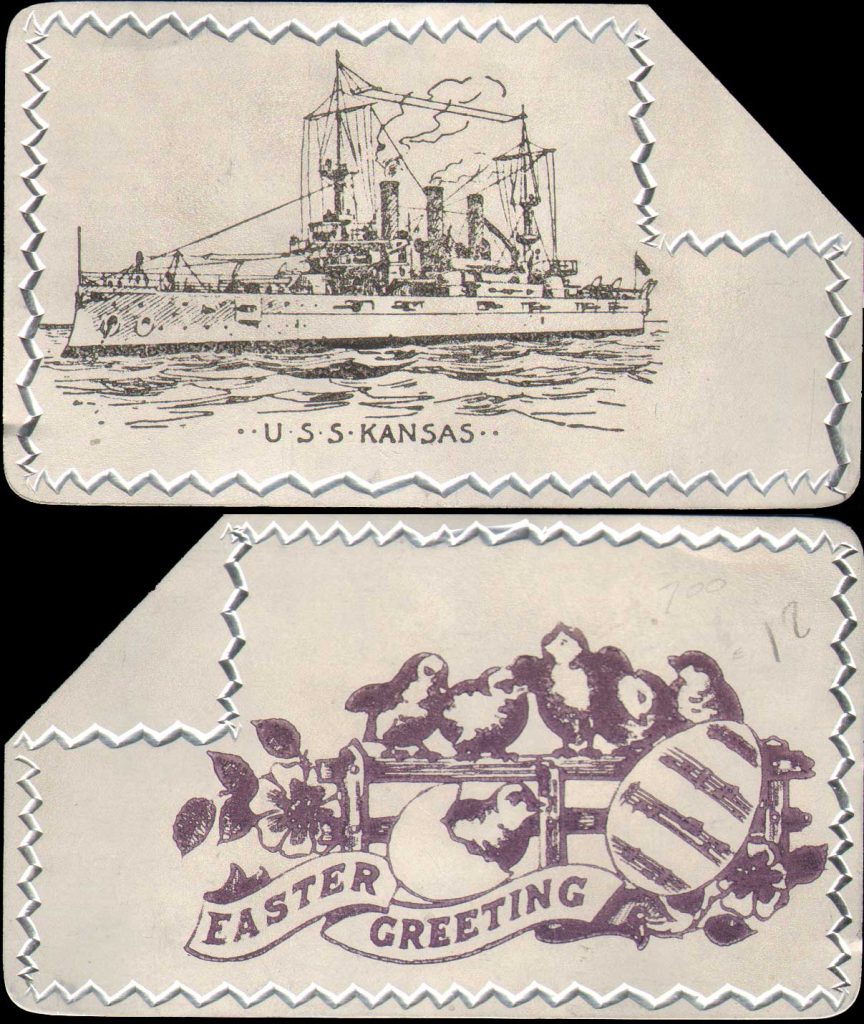 There were not a lot of souvenirs that were prepared for the fleet's visit.  This album was part of the collection that Midshipman Lofquist, USS Connecticut brought back from the trip.  It has a selection of public buildings, parks, and the growing and harvesting of cocoa. 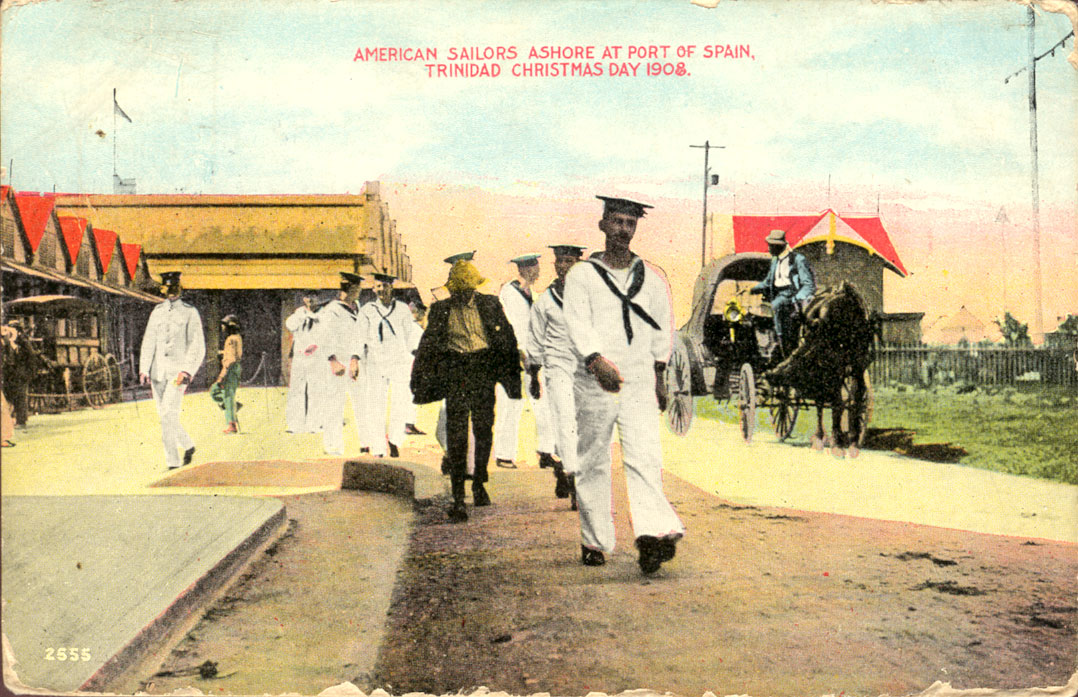 "IN THE SUBURBS OF TRINIDAD"

These are two cards issued by Stratton & Stratton after the cruise was over.  They were sold first in Hampton Roads to arriving sailors, and made available to the public at other locations.

I have, what I believe is almost a complete collection of this series of postcards that I have include in other sections of this website. 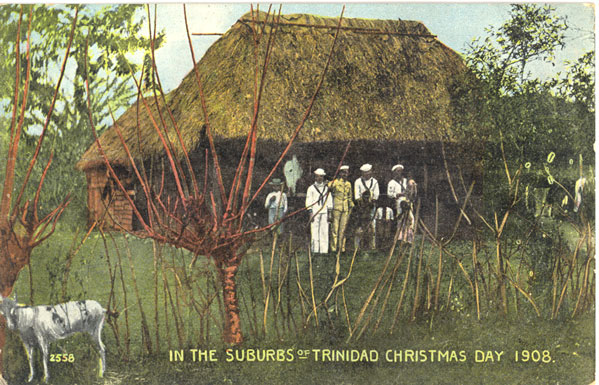 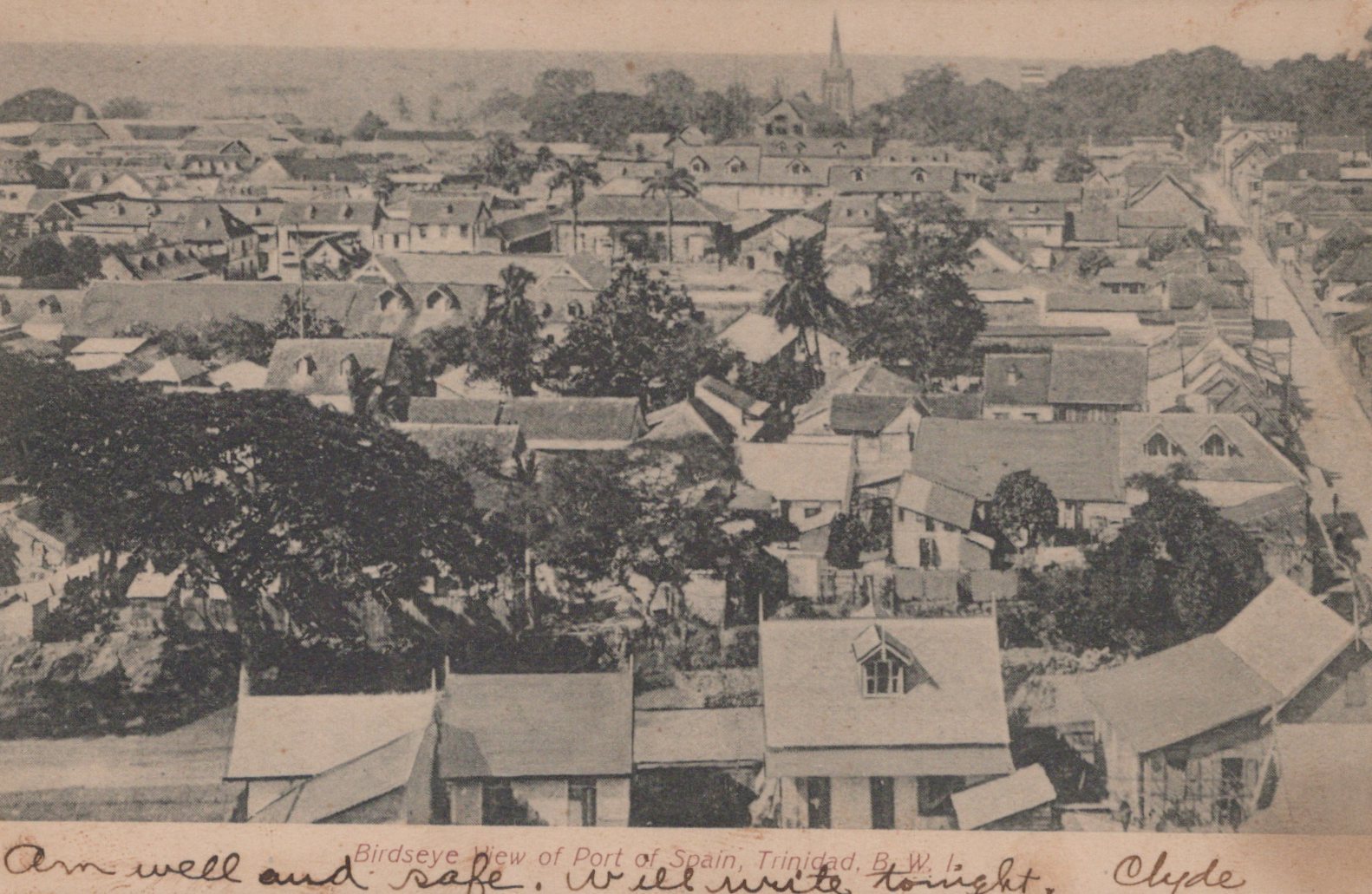 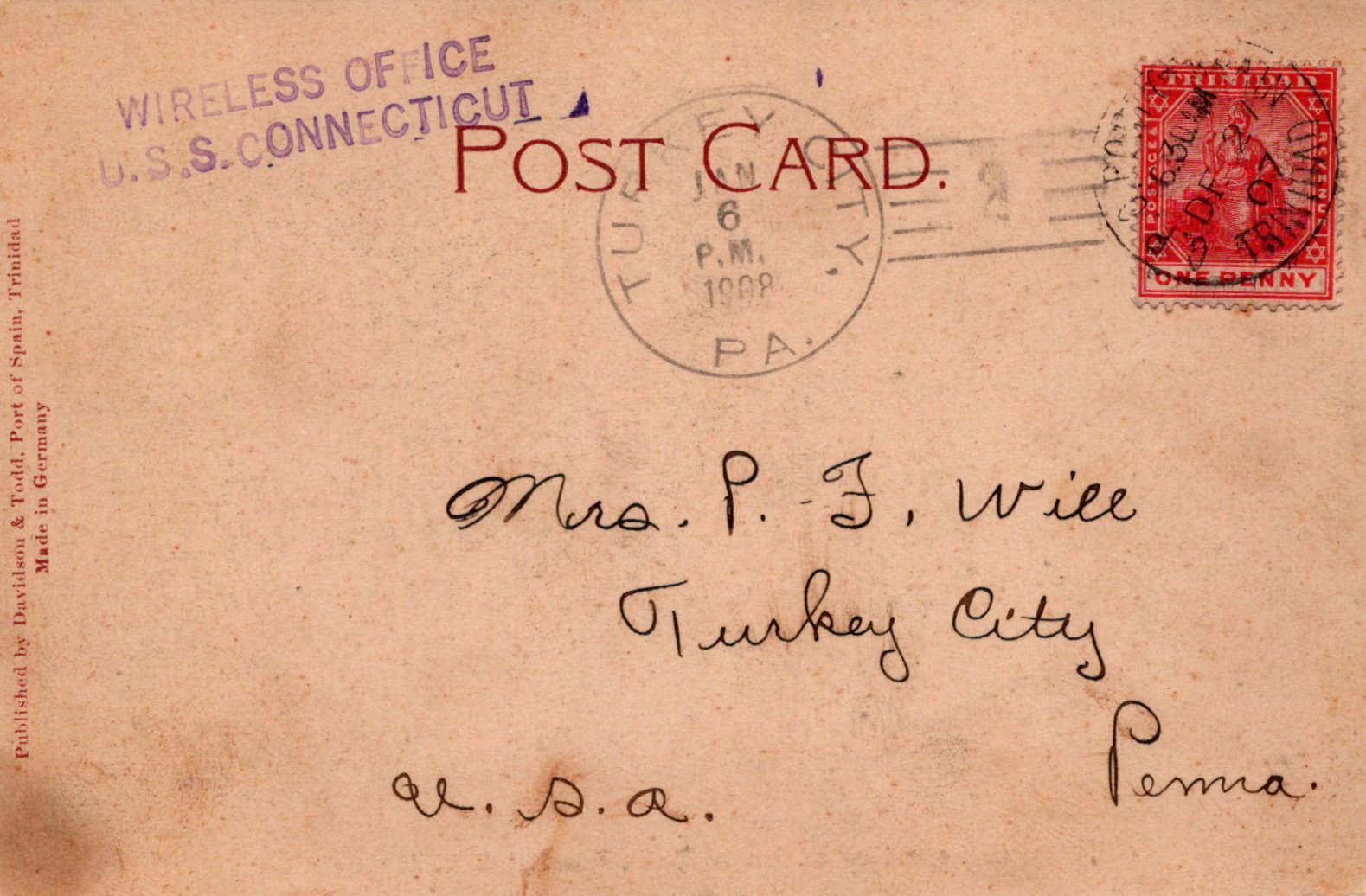 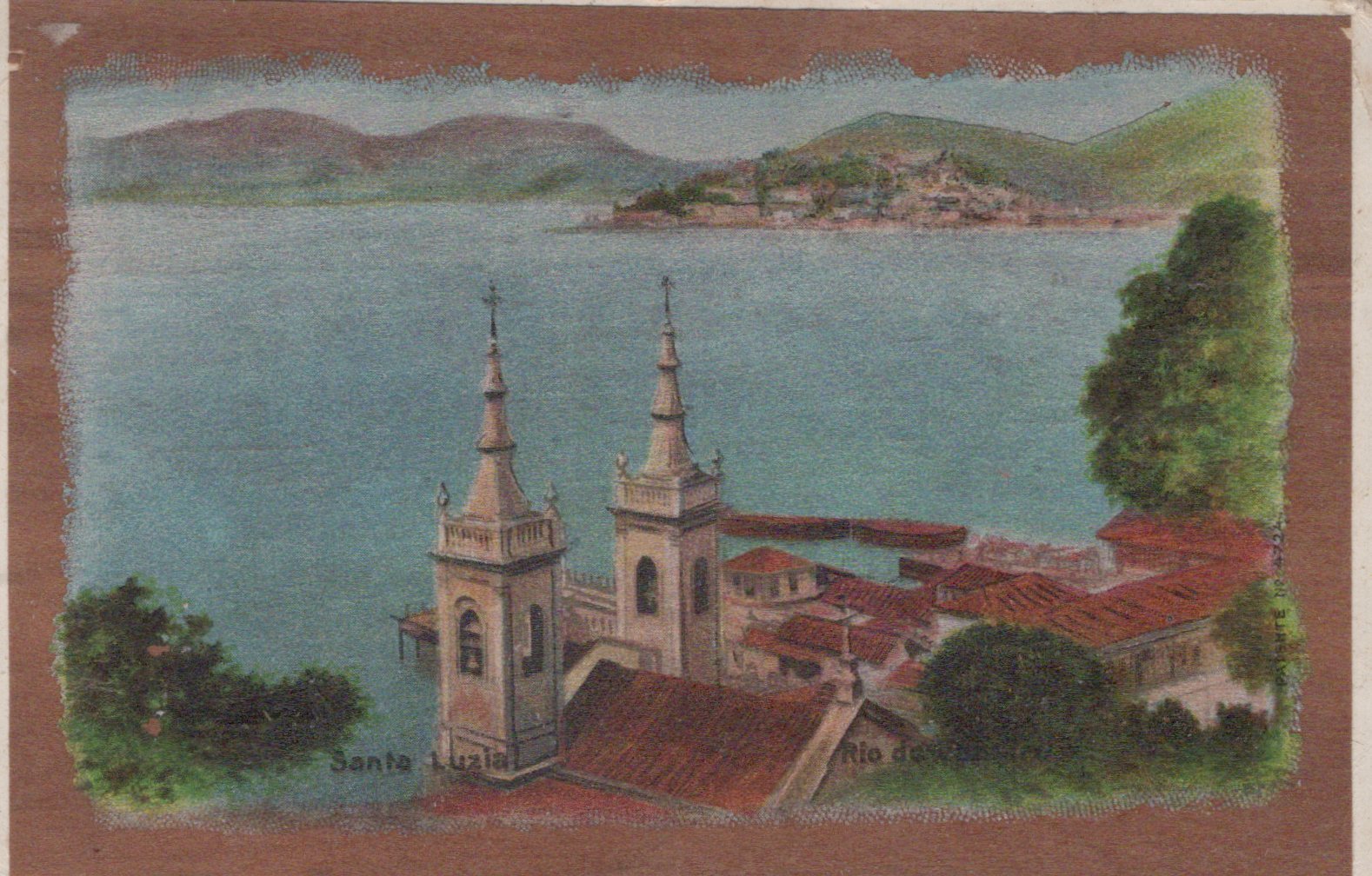 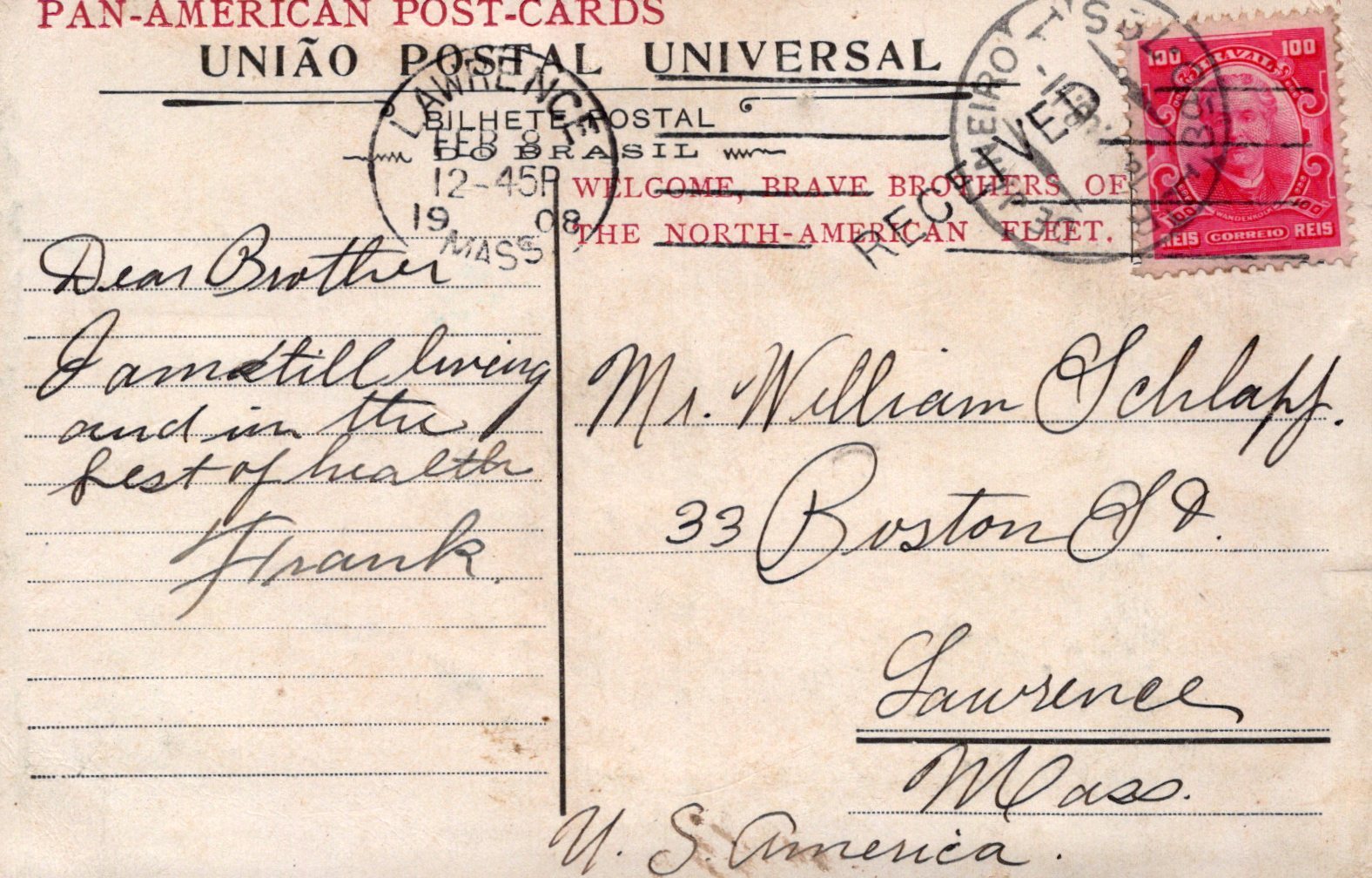 The two cards above are examples of sailors who used the local post office.  Clyde, "I  am well and safe.  Will write tonight."  Clyde was on the USS Connecticut, working in the wireless office, and getting each of his cards stamped as such.  Frank Schlapp wrote his brother, "I am still living and in the best of health."  Frank was a Boatwain's Mate Second Class onboard the USS Georgia.  Both cards cancelled "G.P.O. Port of Spain, Trinidad, December 26th and 27th. 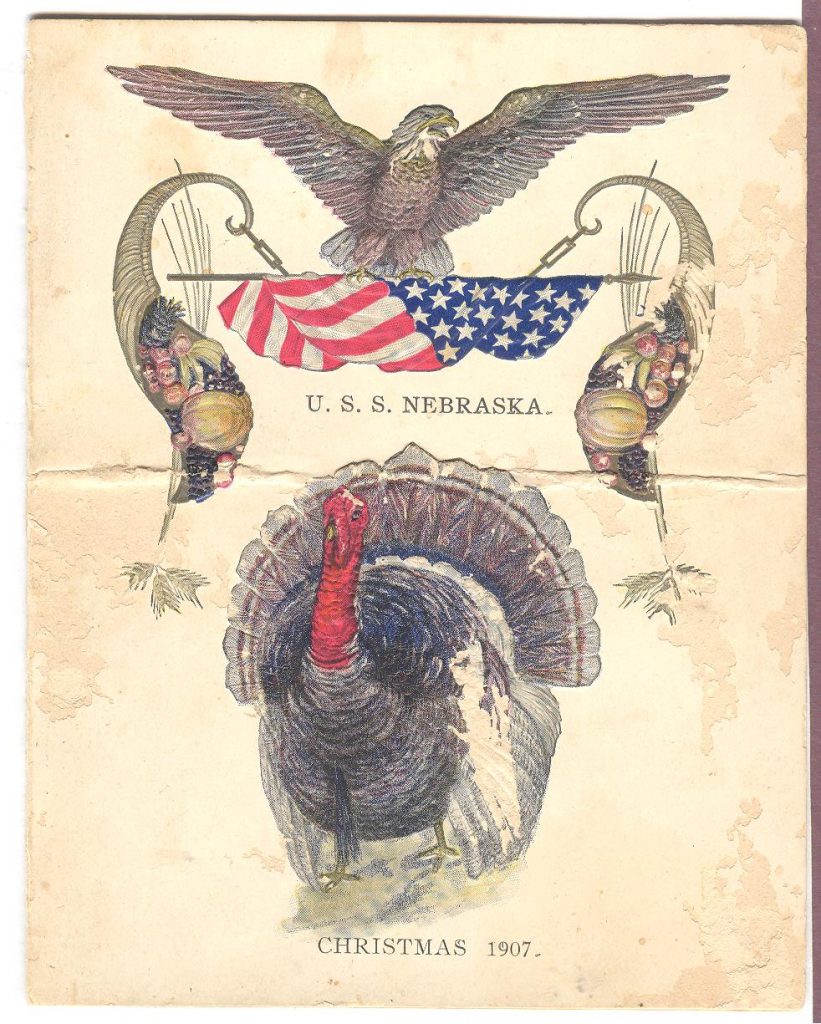 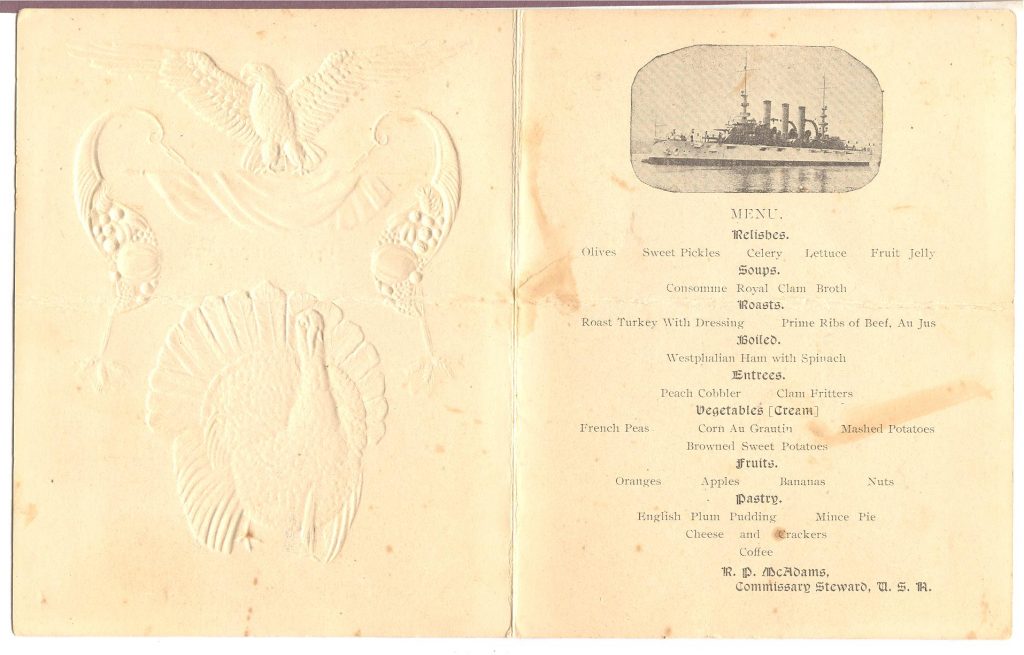 The fleet was at anchor in the Port of Spain for Christmas, but USS Nebraska was still on the West Coast, possibly in Seattle awaiting their arrival.  The cooks of USS Nebraska did everything it could to make it special.  The 8-course menu above included English Plum Pudding and Mince Pie.  This menu was mailed by a crewmember "Earl" to his sister who noted, "From my Darling Brother Earl, far away from us on this ship the Nebraska with the Fleet going around the world." 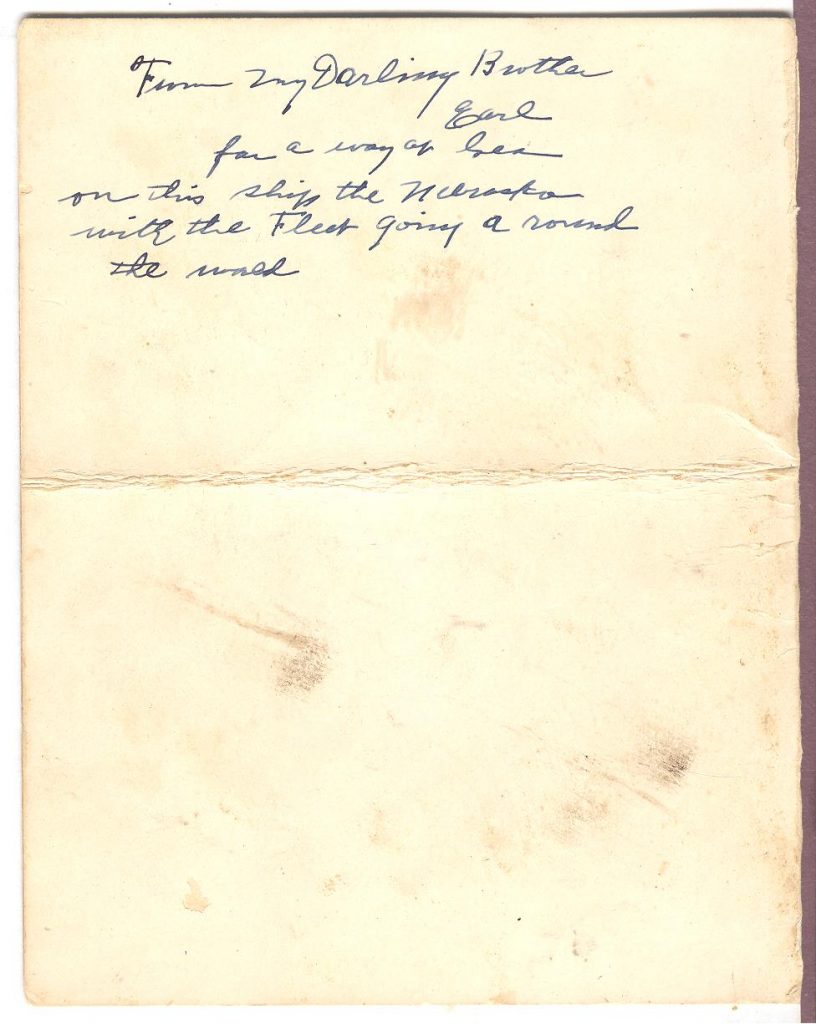 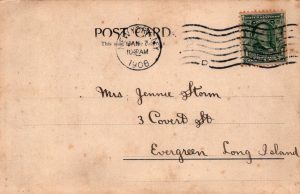 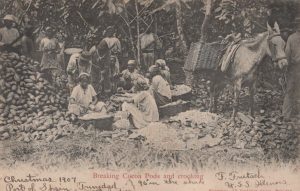