The USS Wisconsin (BB-9) was a Illinois-Class battleship, the other two ships of the class Alabama and Illinois.  It was built by Union Iron Works in San Francisco.  The keel was laid down in February of 1897, she was launched in November of 1898, and commissioned in February 1901 with Captain George C. Reiter in command.  After commissioning she steamed south to Magdalena Bay, Mexico for a month of training and gunnery.  Returning to San Francisco she underwent repairs before steaming north to Port Orchard, Washington for nine days, then again returning to San Francisco.  She next steamed north again with Oregon, Iowa, Philadelphia, and the torpedo boat Farragut for a tour of the west coast, arriving in Port Angeles, Washington on June 29th,1901.  They stayed in Puget Sound training until mid July when Wisconsin entered drydock at Puget Sound Navy Yard at Bremerton.  In October she sailed to Honolulu, taking on coal and proceeding to American Samoa conducting gunnery exercises in route.   She then spent a brief period in Guam before returning to Hawaii and then to the West Coast of South American visiting Callao, Valparaiso, and Acapulco February 26th, 1902.  She then steamed up the Pacific coast, stopping in Coronado, San Francisco, and Port Angeles before entering Puget Sound Navy Yard June 4th to August 11, 1902.

The postcard at right shows the USS Wisconsin as Flagship for the Northern Squadron, Asiatic Fleet.  This card is part of series of cards published by "U.S. Navy Series" and can be found following this link. 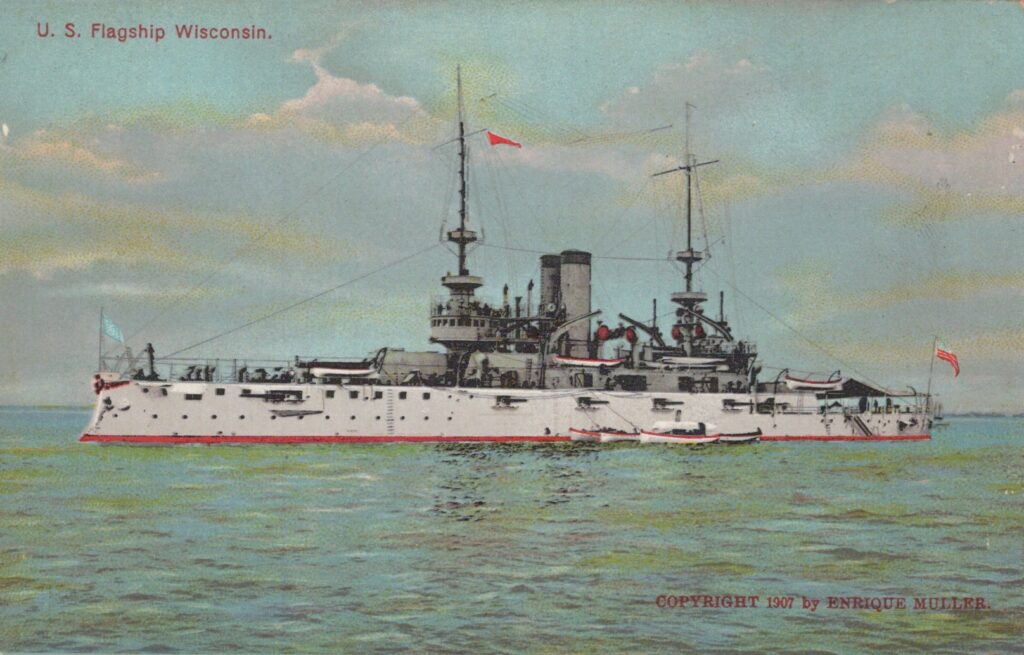 She returned to San Francisco and on September 17th, 1902 steamed to Colombia to enforce the right for transit across the isthmus of Panama as the canal was being built and a revolution was taking place.  Eventually the two parties met onboard the USS Wisconsin and a treaty was signed on November 21st, 1902 an honored in Columbia as the "The Peace of Wisconsin."

Wisconsin was next sent to Asiatic Station to relieve the New York as flagship.  During her tour she visited both Japan and China including a visit to the Empress of China in September 1905.  She departed Yokohama in September 1906 and was decommissioned in Puget Sound Navy Yard in November 1906.

At right is a photo postcard of USS Wisconsin in drydock and Bremerton, below, pierside at Bremerton.  Both photographs were taken and published O. T. Frasch.  To see more of his work visit the Seattle and Bremerton pages of this website. 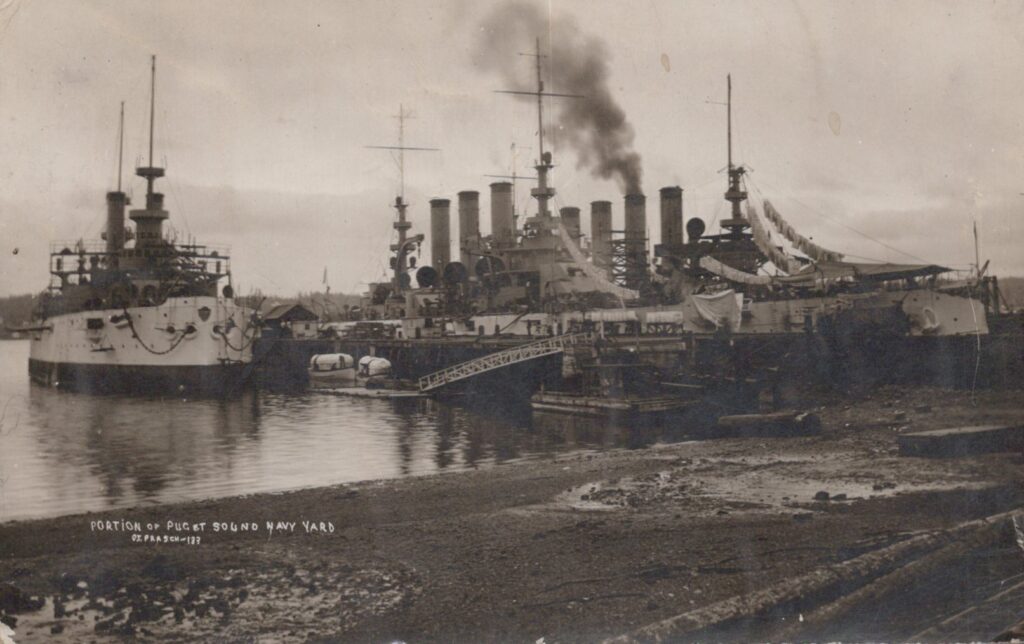 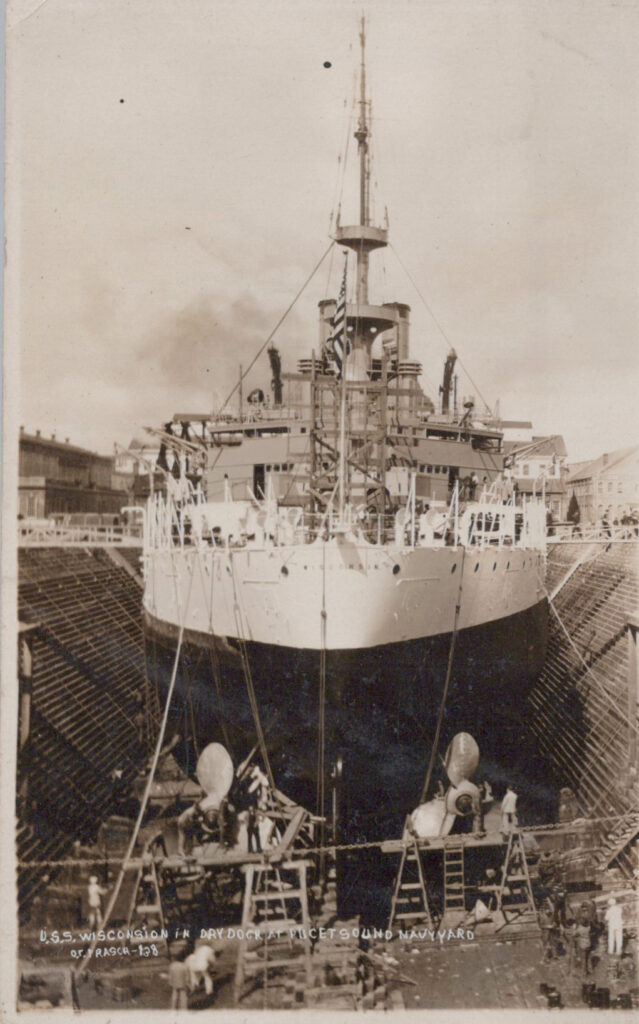 USS Wisconsin joined the battleship fleet in April 1908 when the they arrived in San Francisco, Wisconsin and Nebraska replacing Maine and Alabama, Captain Frank Beatty was in command as part of Second Squadron, Fourth Division.  For Wisconsin the second part of the cruise was quite an adventure visiting China, Malta and Algeria and well as the other port the battleship fleet enjoyed.  Below are two photographs from Malta showing the Kentucky and Wisconsin in Valletta Harbor.  These photographs are from Seaman Battey, USS Missouri and can be found on this website at this link.  At right is another Battey photograph of the Wisconsin at anchor in Colombo, Ceylon. 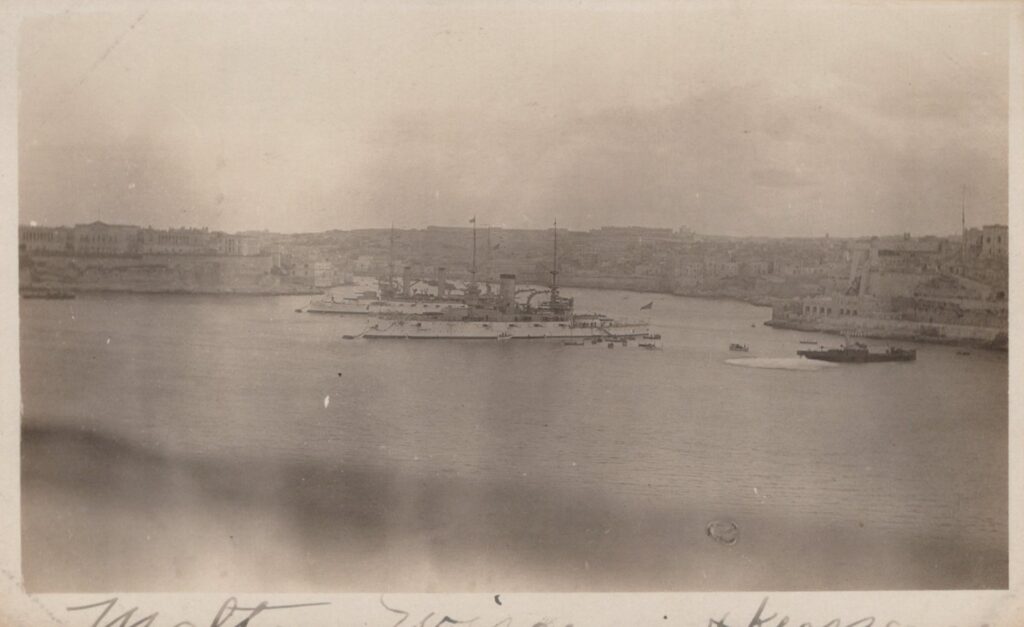 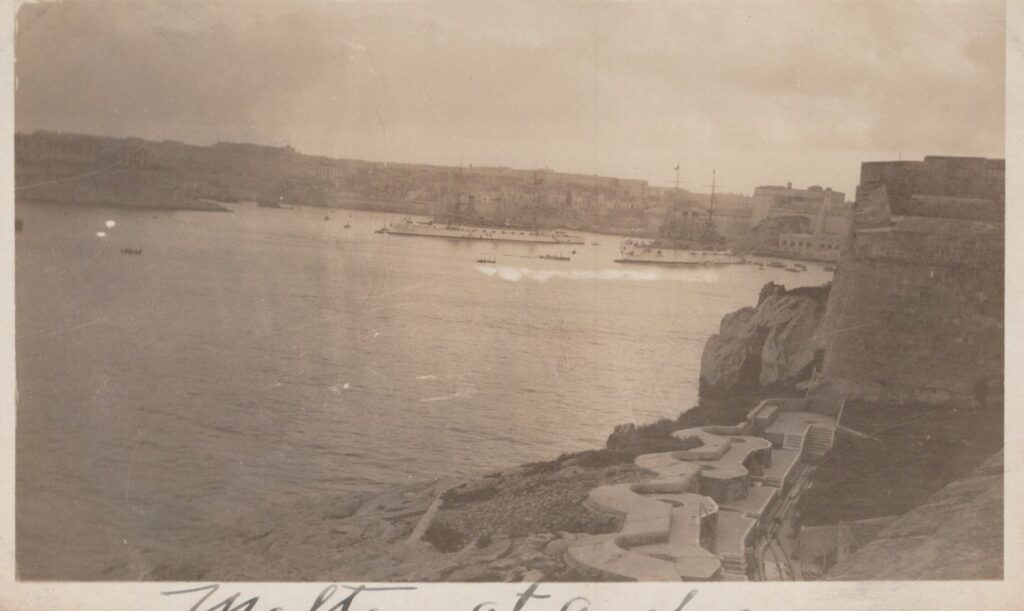 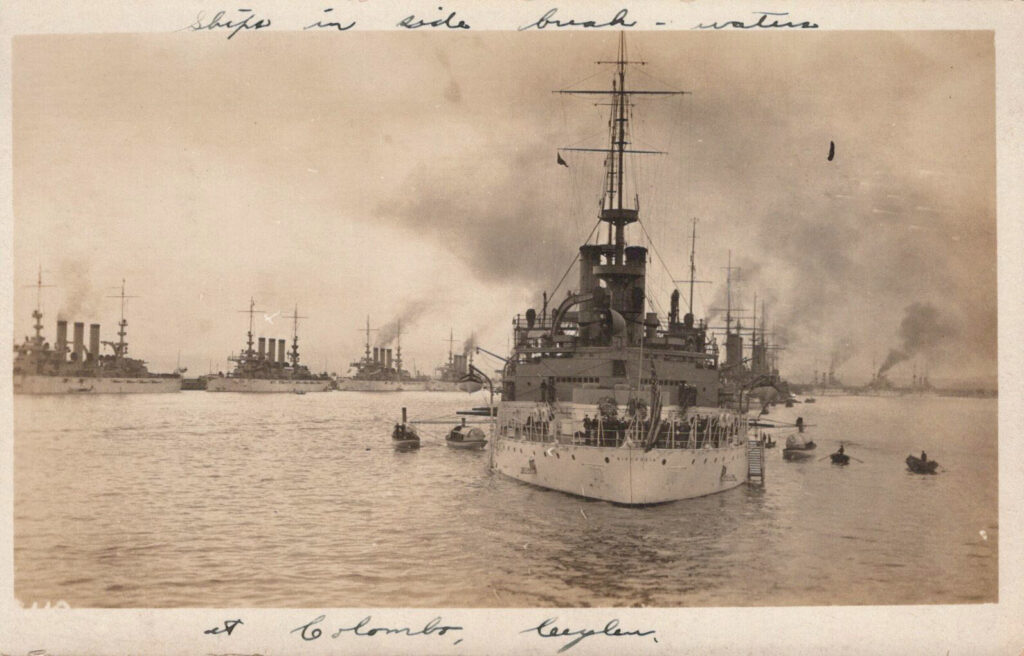 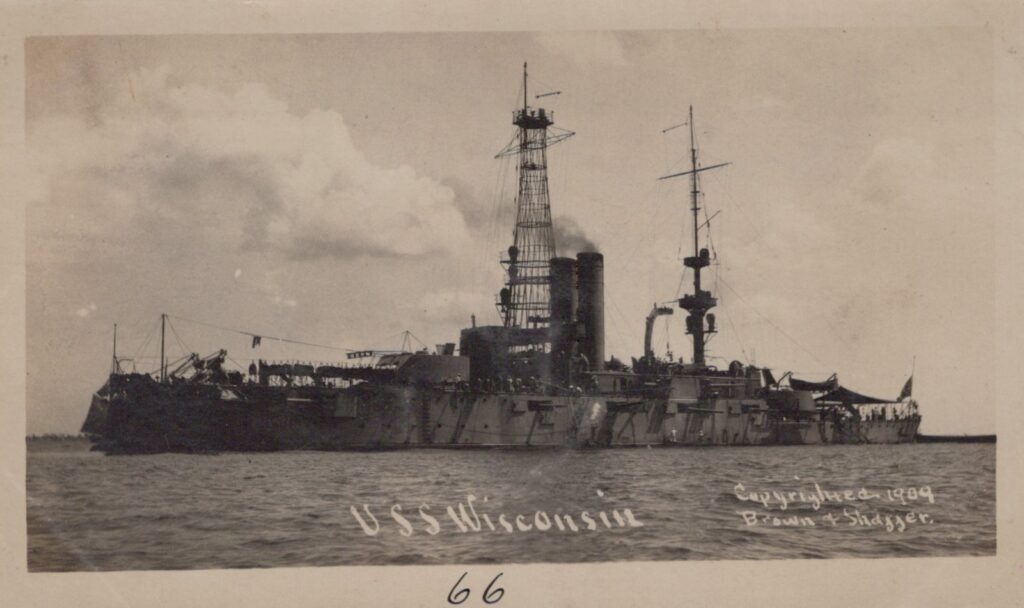 After the cruise she went to Portsmouth, New Hampshire to enter the drydock providing repairs and modifications.  When finished she was assigned to the Atlantic Fleet and participated in the Hudson-Fulton Celebration in the Hudson River of New York City.  The photograph at left shows the Wisconsin with her new cage mast and gray paint recently completed at Portsmouth.  This photo postcard, and the ones below are part of cards made by Brown & Shaffer, before, during, and after the cruise.  To see the entire collection of these photographs on this website, visit this link:  Brown & Shaffer 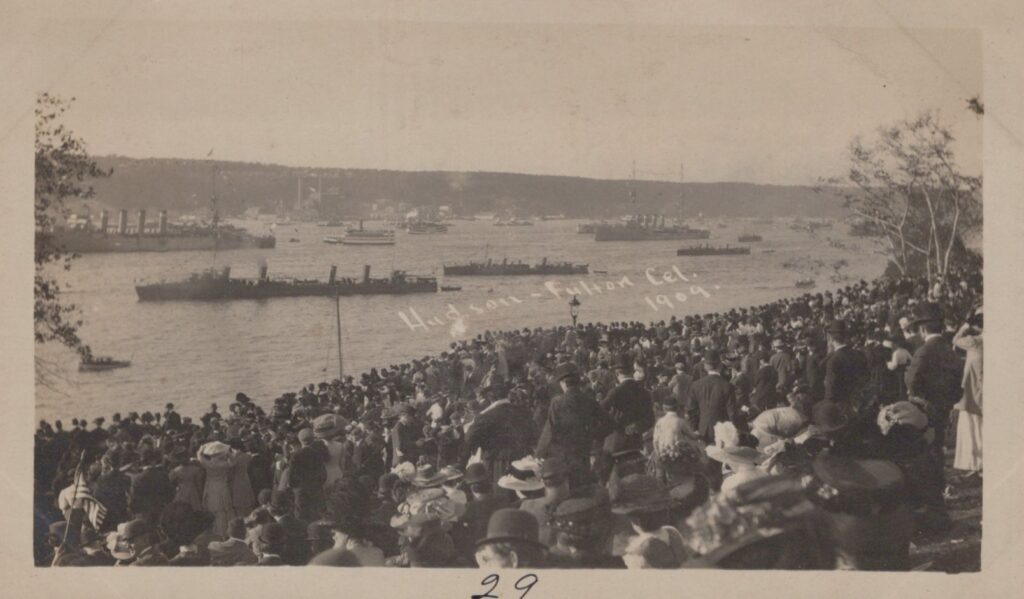 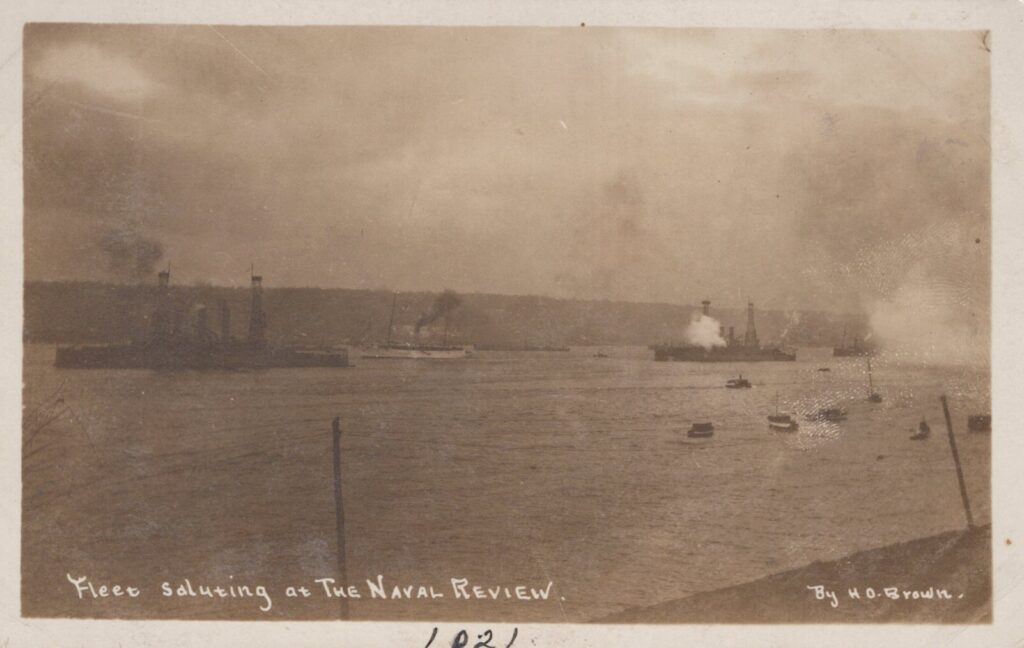 Wisconsin continued normal training and exercises along the Atlantic Coast making periodic trips to the Caribbean until early 1915 when assigned to the Naval Academy Practice Squadron, she transited the Panama Canal with Missouri and Ohio.  She was the third battleship to transit the canal.  She continued serving as a training ship until WWI broke out and was assigned to the Coast Battleship Patrol Squadron.  These duties including training engine room personnel and conducting fleet exercises.  At the end of the war, unlike other battleships of her age, she was no used to transport troops home from France.  Her small size and short range limit her ability.  She instead did midshipmen training to Cuba in the summer of 1919 and was decommissioned in 1920.  In 1922 she was broken up for scrap. 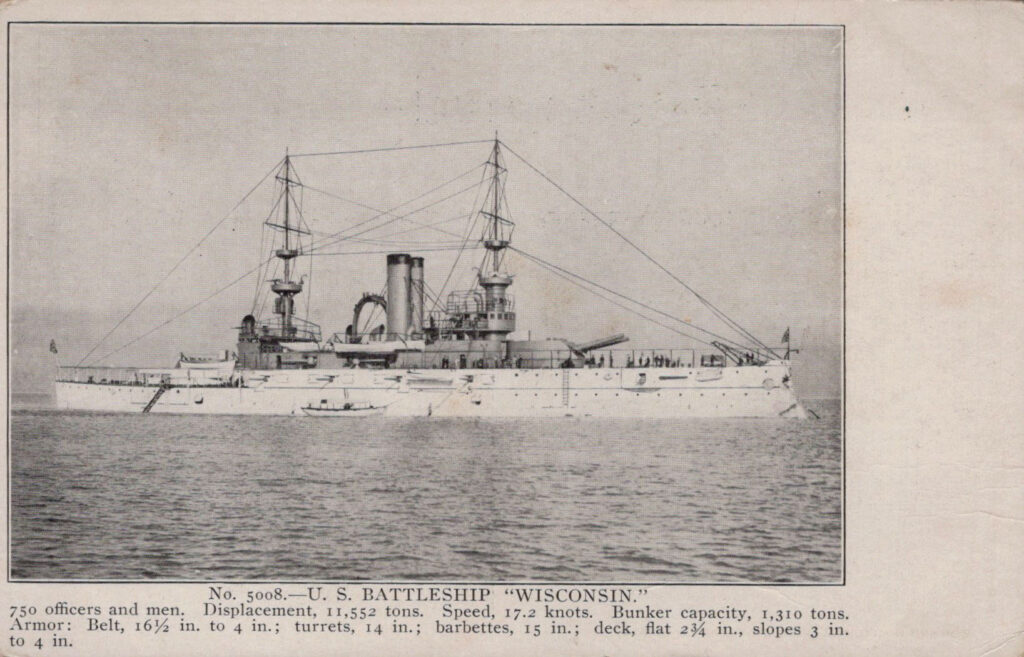 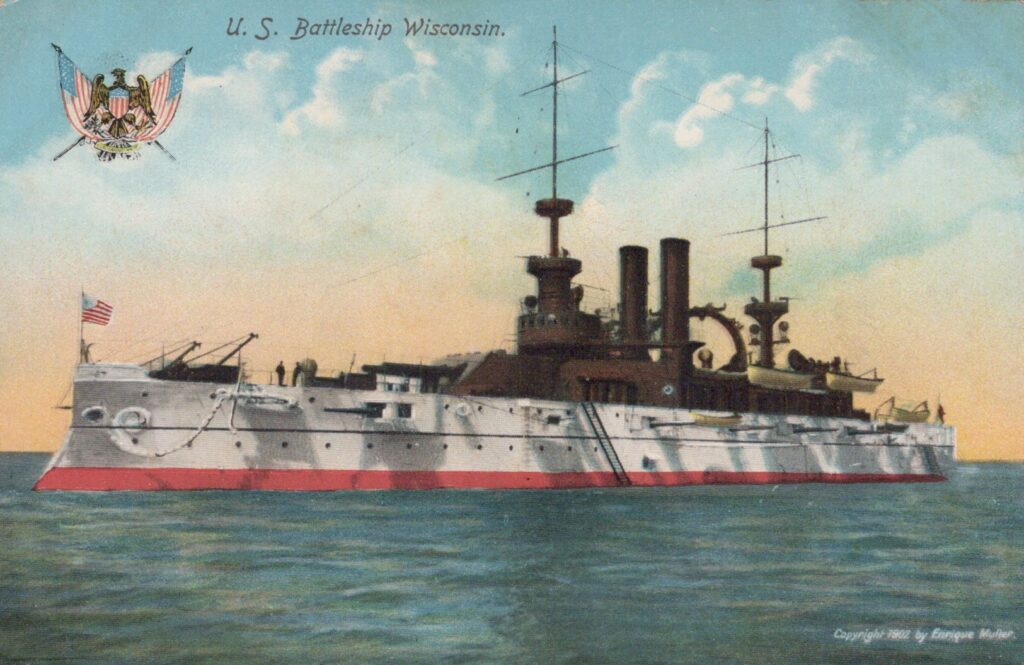